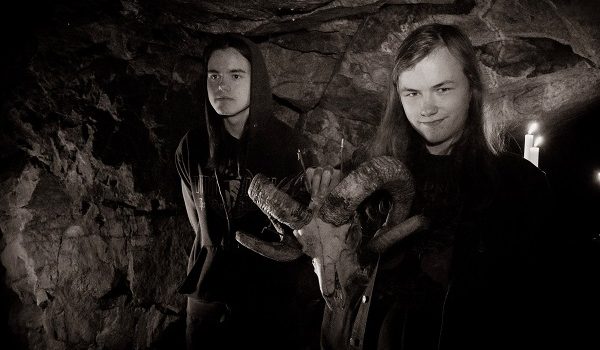 Arguably the sweet spot of the release schedule, October has presented the metal community with a surplus of new releases in which to consume. Now, of course, if you had unlimited time and the capability to cram hundreds of releases into your calendar, then, good for you. Since that’s a near-impossibility, here’s the October 2019 edition of Rapid Fires, our short review column. Up for review this month is After the Storm, Dawn of Destiny, The Drowning, Expain, The Ferrymen, Golden Core (pictured), Hellbore, Iron Flesh, The Last Reign, JD Miller, Nocturnal, Under Attack, and Valcata. 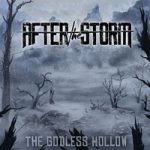 After the Storm – The Godless Hollow (Self-Released)
Returning two years after their first release, Buffalo-based melodic death metal band After the Storm have provided some interesting developments for their second album, The Godless Hollow. Still firmly rooted in melodeath, the album is a bit more mournful in tone and it serves to their advantage. Lengthy tracks are given the proper space to expand, and there’s never a shortage of some absolutely gorgeous melodies to be had. The slower tempo benefits them, bringing a sense of longing to many of the tracks that feel genuine and enjoyable (particularly “Sorrow Within”). A solid step-up. – Kyle McGinn (After the Storm on Facebook) 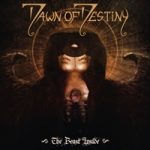 Dawn of Destiny – The Beast Inside (Ram It Down Records)
A German quartet probably not as well known on North American shores as Europe due to lack of proper distribution here, Dawn of Destiny are now seven albums deep into their discography thanks to The Beast Inside. They deliver an interesting power metal style that contains dual clean female vocals and backing male growls/screams, plus add in folk, thrash, gothic, and death aspects to execute their ideas. It’s heavy and melodic/ catchy throughout, as well as moving on a transition-fueled emotional scope. Whether more acoustic/electric through the stirring epic “It’s My Fate”, Tony Martin-era Black Sabbath-like during “Fight Your Inner Demons” or folk/gothic driven against the power passages during “Why Am I Here?”, Dawn of Destiny take the listener on an aural ride that’s potent, dynamic, engaging. Worth investigating for those that love multi-genre blends that don’t lose the plot for brilliant songwriting. – Matt Coe (Dawn of Destiny on Facebook) 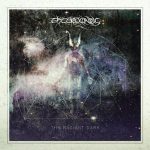 The Drowning – The Radiant Dark (Transcending Obscurity)
Occupying the same slow-mo, but not funeral doom pocket as the likes of Mourning Beloveth, Officium Triste and early My Dying Bride, The Drowning offer up a familiar, yet comforting body of work on The Radiant Dark, their fifth studio album. This Cardiff, Wales-based troupe has been kicking around since 2003 (good for them!), trying to make headway with a style that largely originated from their home country. Across The Radiant Dark, The Drowning spit out the expected array of churning, elongated gates, but check out “Prometheus Blinded” for a natural slab of molten death metal. – David E. Gehlke (The Drowning Facebook) 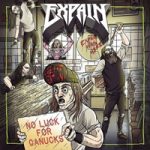 Expain – No Luck for Canucks (Self-Released)
A four-song EP consisting of one original song plus three covers of Canadian artists near and dear to Explain, No Luck for Canucks features plenty of shred, intense drumming, venomous roars and speedy screams, and progressive bass overflow for thrash metal maniacs. “Less Cash, More Thrash” as the original goes for the throat and never relents, even with the narrative curse-filled intro and relatively calm midsection. The covers include “In Protest” from Razor and “In Defiance” by Sacrifice among others– both ripping examples of the potency for the 80’s/90’s Canadian scene. This five-piece possess that tight ferocity and intensity necessary to steamroll the competition, while injecting the right melodic hooks to not be totally off the rails. In other words – mandatory to seek out, consume, and headbang incessantly. – Matt Coe (Expain on Facebook) 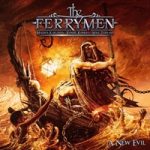 The Ferrymen – A New Evil (Frontiers Music)
A supergroup of power/melodic metal sorts, the trio of musicians for The Ferryman consists of guitarist/keyboardist/bassist Magnus Karlsson (Primal Fear), drummer Mike Terrana (Vision Divine, ex-Rage) and vocalist Ronnie Romero (Rainbow, ex-Lords of Black). Their second album A New Evil keeps the eyes on a Euro-oriented power metal formula, featuring catchy riffs, solid rhythm section mechanics, and Ronnie executing those soaring mid-range to slightly higher melodies you’ve come to know and love in the 80’s-prime Dio period with a bit of neoclassical fervor. Intertwining epic-style efforts such as “Bring Me Home” and “Heartbeat” against anthem-oriented affairs such as “The Night People Rise” and “You Against the World”, these gentlemen know all the tricks of the trade to elevate energy, galvanize the troops, and gain commitment from the metal legions. Solid stuff indeed. – Matt Coe (The Ferrymen on Facebook)

Golden Core – Fimbultýr (Self-Released)
Here’s a cool name for a t-shirt: “Norwegian Stoner Machine.” Such is the name of Golden Core’s first full-length, which was released in 2016. (To wit, saying “Golden Core” out loud makes one think of “Golden Corral,” but, never mind). To the matter at hand, this Norwegian duo has wormed their way into the sweet spot of bouncy fuzz rock and heavy doom, meaning, their songs don’t get swallowed up in a go-nowhere mire. All songs are in the band’s native tongue giving it a unique flavor on the vocal front. Oh, and did we mention Golden Core formed when its members were nine and eleven years old? – David E. Gehlke (Golden Core Bandcamp) 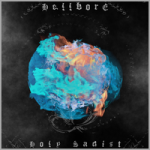 Hellbore – Holy Sadist (Self-Released)
Hellbore are a more modern death metal project that also injects some thrashy tempos and tech flurries into the formula to keep things raging over the course of Holy Sadist. Some throttling grooves (“Dull Your Mind and Sharpen Your Steel”) give it an extra large amount of heaviness to it, and the driving nature of the songs keep the energy level at maximum. The type of music that works best in a small dose due to the formula, and the two-piece behind Hellbore know exactly what they are doing in providing an experience that keeps things interesting while attempting to melt as many faces as possible. – Kyle McGinn (Hellbore on Facebook)

Iron Flesh – Forged Faith Bleeding (Self-Released)
Blood-soaked HM-2 inspired madness is the name of the game for Iron Flesh. They waste little time in starting off with that buzzsaw grinding and monstrous vocals, thought there’s also a slight black metal vibe that helps the band to stand out a bit more on their own. It’s as relentless as you’d expect something like this to be, and due to the switch-up between tempos, it’s also pretty consistent in terms of memorability. Some enjoyable solos and slower melodies (see “Ripping the Sacral”) make this one a worthwhile outing. Nothing wrong with some volatile death metal that isn’t afraid to squeeze some melodies into the mix. – Kyle McGinn (Iron Flesh on Facebook) 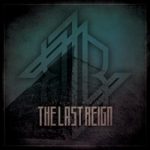 The Last Reign – Prelude (Self-Released)
Another Buffalo-based act for this month in the melodic death metal quadrant, The Last Reign are more aggressive and upbeat in tone. Hitting that early In Flames/Soilwork sweet spot with a bevvy of triumphant riffs – the two original tracks here show how devoted this band is to the Gothenburg-style with energy to spare (just like their previous release Expulsion from Paradise). Massively catchy stuff, and the closing cover of In Flames “Only For the Weak” serves as a fine way to showcase their influences. Those yearning for that older melodic death metal sound really need to dive into this one quickly. – Kyle McGinn (The Last Reign official website) 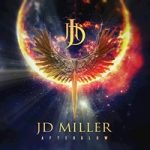 JD Miller – Afterglow (Mighty Music)
Genre blending blurs the lines of heavy music these days – but allows for some intriguing efforts as of late. Swedish act JD Miller for Afterglow synthesizes the greatness of heavy/symphonic metal with modern rock and a heavy dose of melodic AOR for good measure. Smooth vocal harmonies and solid musical hooks give “Inception” an Amaranthe meets Eclipse edge, while “Light My Fire” has more of a Foo Fighters meets Edguy angle to it, and “In the Afterglow” is a majestic eight-minute plus outing featuring thoughtful orchestration, shimmering guitar melodies, and an interesting double bass transition to have Avantasia followers rejoice in the splendor. If you love undeniable choruses and strong harmony support on the music front, JD Miller could be right in your listening wheelhouse. – Matt Coe (JD Miller on Facebook) 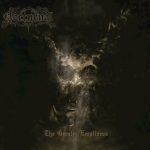 Nocturnal – The Greater Emptiness (Séance Records)
Their first album in 19 years, The Greater Emptiness finds this Australian combo harkening back to a time when black metal sat firmly between the shoulders of extremity and atmosphere, devoid of the trimmings that have so infiltrated the scene. For an Australian band, there sure is a lot of Scandinavian leanings here, which is perfectly fine — the chord ringing and melodic pairings on the title track and the Burzum/Darkthrone action on the appropriately-named “Song of Death” make Nocturnal a worthwhile resurrection. – David E. Gehlke (Nocturnal Facebook) 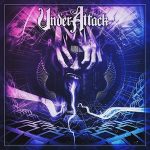 Under Attack – Under Attack (Sliptrick Records)
Using works of Billy Idol, Megadeth, and Queensrÿche for lyrical inspiration, Italian project Under Attack releases a self-titled EP with numerous 80’s melodic hard rock and metal influences through its three songs. Think Dokken, Judas Priest, and US metal a la Savatage for reference points – vocalist Daniele Sciacca has more of a British mid-range style delivery that contrasts in a spacious vibe for “Beyond the Sea” against the vibrant guitar rhythms. “The Rules” is a six-minute closer featuring catchy mid-tempo guitar harmonies and a foundation bringing early Accept to mind, simple but effective in its presentation. The drum programming and demo-quality production does bring the sound down a notch, hopefully something to consider improving on the next go around. – Matt Coe (Under Attack on Facebook) 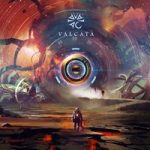 Valcata – Valcata (Self-Released)
If you are going to jump into the symphonic metal genre, you might as well go ‘all in’ from the start. That seems to be the mentality of Valcata, who have crafted a symphonic metal opera with 8 singers (4 male, 4 female) who sing the parts of specific characters in the story. It’s nothing short of incredibly ambitious, and it turns out quite well. It does, in fact, feel like a metal opera and the impressive cover art gives you the initial jump to get the mind going as you absorb the album. But even ignoring the story, there’s a strong collection of tracks that hold plenty of depth for genre fans to get plenty of exploration from. – Kyle McGinn (Valcata on Facebook) 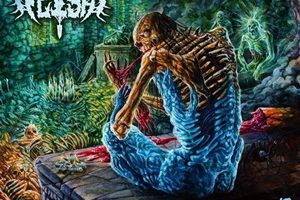