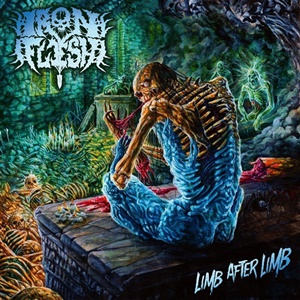 Quickly establishing an active profile on the recording front since arriving on the scene in 2017, French death metal act Iron Flesh combine a sinister mix of classic 90’s HM-2 driven European influences with splashes of classic/extreme heavy metal hooks/touches. Limb After Limb is the quartet’s third album, already releasing two EP’s and two full-lengths in the first four years, intertwining a mix of shorter, impactful songs plus a couple of epic arrangements that showcase more of the versatility, atmosphere, and tempo shifts present within the band’s playbook.

The twin guitar melodies that signal the start of “Overthrow Ov the Sermon Ov God” tease the listener into a calmer arrangement, but soon the blistering rhythms and up-paced snare/kick combinations take command. Julien Helwin’s spirited, discernible growls capture the impassioned nature to the music, the instrumental sections very Maiden-esque between Helwin and Sylver Alexandre in the melodic mastery before going off to the death races again once the verses kick in. The next track “Cursed Within” has a mid-tempo, sludgy atmosphere, occasional tremolo/ circular licks enhancing the evil, groovy atmosphere throughout. Tribal, exotic texture penetrate “Sacrorum Profanationem” – another relentless burst of energy featuring the trademark buzzsaw guitars, killer stop/start movements, conveying a sound that’s close to the edge of terror without losing control. When it comes to the longer songs, “Honor in Death” wins this scribe over, the evil Sabbath-esque triad of notes transforming into a death/doom mixture of riffs that are as heavy as they are brutal, drummer Guilhem Arbogast measured in his duties to this arrangement, while the lower, clean/chanting of the title during the back half of the 7:27 timeframe haunting. Most ardent death metal mavens will know where Iron Flesh take influence from (Entombed and Dismember high on the list), but there’s a sense of versatility that ensures from first track to last, these musicians know how to keep things moving along in an interesting, engaging manner.

Limb After Limb should keep Iron Flesh top of mind when it comes to 90’s-influenced death metal, as this is top-shelf material. 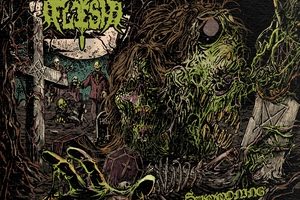