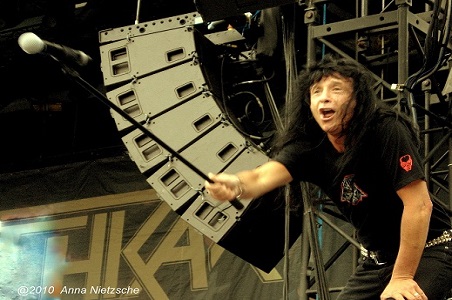 (This content originally appeared on Blistering.com in September of 2011)

Pushed out of the way in 1992 to make way for John Bush and a more “modern” sound (by that time’s standards) on Sound of White Noise, Joey Belladonna has quietly waited in the wings for another chance to do an Anthrax album. After a few false-starts in 1999 and 2005 respectively, the man has finally put his vocals to tape on Worship Music. Aided by his relentless solo touring schedule, Belladonna’s vocals make the album the shining success it is. Just check out the man’s booming, hooky-as-fuck choices on “I’m Alive,” “In the End” and “The Giant.” Even with Bush at the helm, never has there been such an onus on vocal melodies and choruses, giving Anthrax what is perhaps, its most complete effort to date.

Yet Belladonna sounds hardly satisfied. Rather, he sounds weary of his place in Anthrax, the result of the aforementioned sacking in ’92 and confusion around the band’s ill-timed Among the Living-era reunion in 2005. Fact is, Anthrax had no one else to turn to after trying to push newbie Dan Nelson on the public and trying (unsuccessfully) to get Bush back on board in 2009. Based on this particular conversation, it’s almost as if Belladonna is expecting the axe to fall so he could return to being a solo artist.

His constant references to his bandmates as “they” show an odd divide, one that could (key word: could) indicate all is not peachy-keen in the Anthrax camp. Either way, Belladonna is still entrenched as Anthrax’s lead singer, and based on our chat with the man, he seems intent on keeping it that way. For now…

Blistering.com: You never stop, do you? Even when you’re not doing Anthrax, you’re doing your solo stuff.

Joey Belladonna: I really like gigging and playing. I played four nights this week. I was out until three in the morning last night. I love the experience to learn and get better, you know?

Blistering.com: Your voice sounds great, by the way.

Belladonna: I don’t know, I’m just really conscious of doing what I need to do and finding the moments that work and I just roll with it. I didn’t even hear half the songs [before I recorded them], I covered them everything I had to musically and did them the best I could. I went in without hearing any of the music. It’s like when I did Spreading the Disease.

Blistering.com: When [producer] Carl Canedy (The Rods) called you in.

Blistering.com: Was there any set approach for you in terms of the new songs?

Belladonna: I took them song-by-song. I just go in there and do what I can do. All I know is that I wanted to do the best I could with it. And we all know the expectations with it were interesting, but I couldn’t do anymore than what the songs were letting me take on. I’m glad this stuff wasn’t too un-singable or something that didn’t fit me. That would have been the worst part of it, to muster up something that wasn’t there in the first place. Glad it wasn’t something like “Gung Ho” [from Spreading the Disease] where everything has to be a mile faster than what it needs to be and there’s 50 words per verse. You’re lucky if you can get a word in to say it.

The songs are laid-out fairly decently. I didn’t get as far into the record as I could have, though. I sang in a day, three-to-four hours until I was done with a song entirely. We demoed it, looked at it, changed this, re-do that…none of that. Bang-bang. For some reason, it worked, like my first time I did better than I thought. It’s nice when it’s spontaneous like that. Would it have been nice if I could have been there from the beginning? It’s not always necessary and it doesn’t make for a better record. There’s no evidence of that. There’s people that have spent years on things and I don’t even know if they know what they got until they’re done with it.

Blistering.com: Did you hear anything that Dan Nelson did?

Belladonna: I heard some ideas, but I can’t refer to that stuff. I don’t want to be persuaded from anyone else’s doings. I heard from the band, we just talked about that stuff. We discussed it as much as we could and even that, none of it was in my head. I had some basic tracks to the songs at the house just so I could hear where the songs were going. Other than three-to-five songs, I had no idea what was coming at me until I turned them on. It worked great for me. That’s how I write anyway.

Blistering.com: So from that, “The Giant” turned out really well.

Belladonna: Wow, really? I remember looking at that one and going to Scott [Ian, guitars], “That’s just a shit-ton of words.” It doesn’t even stop, there’s not even a pause. I left out the front and did the chorus first and they were like, “Wow, that’s awesome, that’s really cool!” We had the chorus first and backtracked and did the main vocals, which was supposed to be an answer-and-call. The song turned out great, it’s just one of the ones that I was least interested in doing first. I think that was one of my last songs other than “In the End.”

Blistering.com: That’s another good one.

Belladonna: Yeah, with “In the End,” that’s a smoking tune. I dig that song a lot. When I started singing that, it was something. With that kind of tempo and that riff…that was the night of Ronnie’s [James Dio] passing to that day. Something was going down in that room that night.

Blistering.com: At least in terms of an Anthrax album, I don’t think you’ve done this many harmonies and sounded this melodic.

Belladonna: Oh yeah, totally. I fought to do more of that because at first, we didn’t; it was about getting the structure down. I didn’t want to hand them [Queen’s] “Bohemian Rhapsody.” As time went on, I would add the harmony and we’d go, “Wow, that’s good.” I always have harmonies in mind and now that they’re open to doing them…I’ve wanted to do them since Spreading the Disease, but they’ve been really reluctant. I’d always have to get an “OK” to do a harmony. There’s plenty of room, but they always felt it “softened” it up. It’s depth, layers, it almost fattens it sometimes. Of course they can get too sweet, but if you lay them in there with the mixing, people don’t even realize there’s harmonies because they’re so tucked-in.