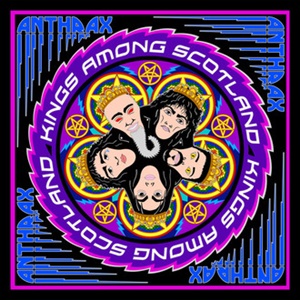 Legends of the big four thrash movement, Anthrax needs no introduction – steadfast in their commitment to the metal cause since the early 1980’s. Kings Among Scotland captures a live performance in Glasgow, Scotland at the historic Barrowland Ballroom on February 15, 2017 – available in multiple formats of double DVD, triple vinyl, or double CD (of which this scribe is reviewing only the audio portion of the concert). The lineup contains latest lead guitarist Jonathan Donais (Shadows Fall), as well as the classic lineup of Joey Belladonna, Scott Ian, Frank Bello, and Charlie Benante, and a setlist split between fan favorites as well as the entire Among the Living album spread out into an intense two-hour outing.

For men that have been at the game decade after decade, it can be quite daunting to keep up with the energy output and intensity that songs like “A.I.R.” and “Medusa” exude – from the propulsive rhythm section work all the way to Joey’s higher screams and upper falsetto register delivery when necessary. You’ll also get the chance to sample newer songs like “Blood Eagle Wings” and “Breathing Lightning” that prove Anthrax aren’t mailing in activities on the songwriting front, they appear quite content to develop current material that can be relevant to possess proper leadership qualities. For this scribe’s money, it’s hard to argue about the impact to thrash that Among the Living has had on the scene – beyond the obvious hits like “Caught in a Mosh”, “I Am the Law”, and “Indians”, there are some deep cuts that just mow down the competition and achieve chill bump, hair standing on edge emotions. It’s surprising to hear how well tracks like “One World” and the blistering “Imitation of Life” hold up today – the little groove-nuances, steady Ian-led rhythms, appropriate gang-oriented background support, all uniting to prove Anthrax still are masters of their craft.

18 songs, killer cover art by Steve Thompson that obviously pays homage to Rock & Roll Over from Kiss, and added bonus interviews/behind the scene footage should you choose to pick up the DVD set – Kings Among Scotland is a fitting document to all Anthrax followers who wait patiently for the next studio outing.