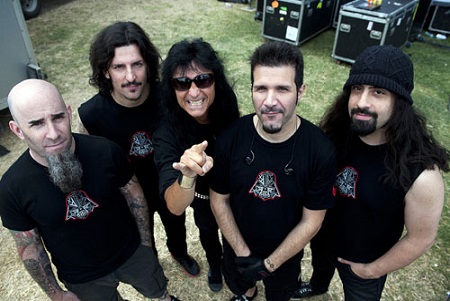 Blistering.com: People seem to forget that you’re not a straight-metal guy. Your background has to help when doing these things, right?

Belladonna: It seemed to hurt me because they thought my mindset wasn’t “Anthrax!” “Thrash!” “Metal!” I like all of that stuff. Just because I didn’t know who Accept was when I joined the band didn’t mean I didn’t know what the approach was. Let’s face it, when I came in, I was a tenor. I could have sang higher. Then [John] Bush comes along and it’s like I’m not heavy enough, and all of that was a crock of shit. It’s not like I couldn’t do any of that stuff. Some of these people sing that way naturally, they have the gruff. They sound tougher and if you’re not into that style, fine. There’s some people who don’t like Geddy Lee or Robert Plant. It’s another taste, but I know I could have done any of the other records. As you can hear now, we could have taken…they sort of “modernized” the writing. I don’t know if that’s intentional or they moved into new avenues of placing chords and tempos.

Belladonna: I would have done fine. They already have someone else on there, so live, I don’t want to venture too much into that stuff because I don’t want to hold myself to a certain standard of if it’s heavy or cool enough. All that shit. I’m not up for that competition now. It happened before and it was just a drag. I don’t want to be demeaning. I look at Scott, when he said when they did The Greater of Two Evils [2004’s remake album with John Bush re-recording Belladonna’s songs], that’s how the songs should have or could have been. I was like, “Wow!” I felt like I got smacked across the head on that one. Like, “I was really that bad? You didn’t like anything I did before?” I don’t hear [those remakes] as remotely close to being better. So I know I could have done those records.

If you take what I did now, on the new record, and throw it on the pile, you would get something in that vein. If anything, it was laid out more for me than it is now. I don’t think they “thrashed-out” anything more than we did earlier in the day. Like “Fuel” or “Room For One More.” I could have done my own thing with it. But I never looked at it like, “I wish I could have done it.” I never heard it as anything exponentially better than what we did before. Then of course when you start comparing [sales] numbers and I can’t go there. They did it and I don’t know if they needed to go that far, but you get what you get. I’m still in the band and I feel a little bit like, “Are you guys sure? Are you content? Or you just need me right now?”

Blistering.com: It’s all come full-circle. Do you think you’ll be able to maintain this momentum?

Belladonna: We’ll get the report from the record, obviously that helps everyone’s morale. If everybody is content with hanging with each other, which I don’t think should be a problem, if business is done in a fashion where it’s all done correctly and fair and sufficient, then hopefully everyone’s interest in doing it is still fresh. I will continue one way or another.

Blistering.com: Do ever listen to what people have to say about the John Bush-era or your solo stuff?

Belladonna: I occasionally will have the urge to take a peak. Eight out-of-nine or ten times, I don’t do it, just because I’m not savvy. Most people tell me “Here’s your ticket.” I have my phone, but I haven’t turned my computer on in a month. I don’t know what I’m supposed to do or verify everything by. From what I gather, a lot of it, to believe the good you have to believe the bad. But it seems like usually it’s someone sitting there and wanting to throw snowballs while you’re 2,000 miles away. Whatever. They probably didn’t like me in the first place, so why don’t they listen to something else?

Blistering.com: Were you as confused as anyone when Anthrax kept switching singers?

Belladonna: I got wind of it. I wasn’t their first choice to come back into this thing. Put it this way: If John said he wanted to do it, they probably would have taken him. If they would have done the Big 4 with him and it would be successful? Who knows? Would they finish the record? Who knows? If they didn’t have a fight with a guy that first had to finish the record [Nelson] and would have put it out, they would have done that. To me, you got what you got. Somehow, we’re all unfortunately happier this way because it’s the best solution. I’m not trying to pat myself, it just seems to be the right thing. Unfortunately I had to wait 20 years to put out another record.

Blistering.com: To me, it’s always seemed like you’ve been ready to do it at any time.

Belladonna: I have. I have been WAY ready. I’ve always been ready. Even with the [2005] reunion, I was ready to roll. Then they got someone out of the blue. I’d like to know who actually did that. I was like, “What the heck happened? Why do you even bother?” It was two-to-three years of that. I guess he [Nelson] came up with a great demo for everyone, an expensive one for everyone to try things. But to sell it, that it would be the right way to go, it just shows that it’s not an easy thing to muster this up. We are a unique package of musicians and there’s no band out there that has a lineup that if you’re trying to recreate it, you’re not going to have much luck. For Anthrax, it’s hard for us to pull it off. This thing is a little more intricate.

Blistering.com: I love John Bush and some of the albums he did were pretty cool, but this feels right. Is that what you’re hoping people will get out of it?

Belladonna: I hope so. It’s hard to hear it like the way you just said it. Like, “Here was this guy and I hope this guy is as good as him. OK, he’s passed the test, you’re in.” Or, “Hey, you’re the guy and I give you all the credit, you’re in.” I’m not sure what it is. I know John is good and I’m not sure what is good for what. Is it that good? I don’t know…I’m not sure and I really don’t know what to say about any of it because I don’t pay attention to it. I just know I do what I can do. I always feel like I have to prove something, but I don’t want to have to prove something. I want to do it naturally and feel confident enough that I’m actually doing it.

Blistering.com: I think you pulled your weight, Joey. You should be proud.

Belladonna: I guess so. I know you said the comparison stuff is bit boring after a while.

Blistering.com: That’s probably why you leave your computer off.

Belladonna: Personally, I don’t really care because I can’t do anything about it except do what I do and hope the band will see enough of it for them to stick by me. And Frank [Bello, bass] says, “I guess I gotta kiss your ass in interviews.” I said, “Do it naturally. I don’t need any favors from you if I don’t need it.” Just say you’re digging what we did. Is that too much to say? I don’t want to be bitter, but it’s confusing at times, like, “Is it really that bad?” I feel like somehow, I passed the test of approval. It’s that not easy to get up there and sing this stuff. It’s very challenging. It’s not hard for me, but definitely challenging. I’ll give it up for anybody if they want to do it. I don’t care. It’s not the easiest kind of singing.