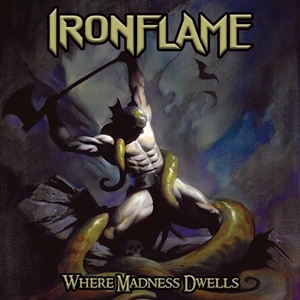 Andrew D’Cagna is quite the active musician in the heavy metal community. He’s been a part of Brimstone Coven for eleven years, Icarus Witch for five, plus working on a black metal project Nechochwen since 2010 – beyond his personal labor of love Ironflame. Already familiar with his back catalog, Where Madness Dwells as the fourth record contains ten more tracks of old school influenced traditional power metal – intertwining a mix of US/UK influences that recall the greatness of Iron Maiden, Savatage, Dio, and Jag Panzer among others.

Choosing to switch up his normal fantasy/epic themes with more reality-based content probably has an indirect influence from the pandemic – as Andrew’s best friend passed away due to cancer plus the upheaval within the global political climate stirred deeper thoughts that he would channel into the lyrical content. Handling all the instrumentation and vocals on his own beyond solo breaks (guitarists Quinn Lukas and Jesse Scott who tour with Ironflame supply stellar, fluid parts on that front), there’s firm understanding of versatility between energetic arrangements as well as mid-tempo or epic-oriented efforts. People can easily navigate the emotional range and circular, crunchy to patriotic-like atmosphere for “A Funeral Within” then galvanize the masses with the power riffs and Anthrax/early Metallica-like charge of the follow-up “Ready to Strike” where Andrew adds proper background vocal harmonies to cement the main melodies of the verses and chorus. The main choice of musical hooks starts from a Maiden-esque platform – Andrew’s obvious love for the work of Smith/Murray present when you hear songs like “The Phantom Flame” and “Infernal Angels”, mirroring many of the classic aspects that put albums like Powerslave and Somewhere in Time in the hearts of millions. And while many will not miss Andrew’s penchant for hitting specific heights and depth in his voice a la the Air Raid siren Bruce Dickinson, there is also a bit of Joey Belladonna meets classic rock personality that seeps through which engages the ears in a charming, dynamic way.

Progressing in adequate time record to record, Where Madness Dwells continues to keep Ironflame as one of the shining beacons for US traditional power metal if you love that classic 80’s sound with the right balance of anthems and up-tempo offerings which hits that sweet spot in your brain each and every time.