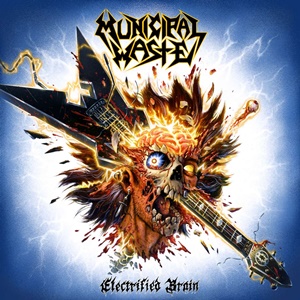 Veterans at this point of the crossover party thrash movement, Municipal Waste get down to business with their addictive riffs, seething vocals, variant tempos from groove to warp speed abilities and deliver a boatload of material in economical fashion. We all have our favorites in the catalog (for this scribe, The Art of Partying plus Slime and Punishment fit that bill), now entering seventh album territory for Electrified Brain. At this point in the quintet’s career, it’s more about staying the course rather than veering off into new horizons – and that’s what you’ll get here in heavy doses.

After a 17 second ‘shock’ filled intro, the title track gallops front and center into your horizons, the twin rhythm guitars bursting at the seams, blitzkrieg leads with Bay Area meets NWOBHM charm. Throughout the record, paying homage to the greats of the past are evident – “Grave Dive” containing that mid-tempo Exodus-like stomp from the “Toxic Waltz” period, while the half-time transformative riff to “High Speed Steel” would make Kill ‘Em All / Metallica maniacs pit happy, even with the ‘oh…oh… OH… oh’ unison gang vocal support. Only one of the fourteen cuts clips the three-minute mark – and that’s by two seconds for “Thermonuclear Protection”, where vocalist Tony Foresta rips through the verses as John Connelly’s twin against the razor-sharp musical precision and Anthrax-oriented shift perfect for war dancing. Most of the alcohol-fueled legions will dig “Ten Cent Beer Night”, while the lurching atmosphere for “Blood Vessel – Boat Jail” features a series of triplets before the semi-blasts and aggressive measures take over for the final 40 seconds. By the time the eerie ghost-like noises for “Paranormal Janitor” fade into oblivion, most will just press play again for another full listening session.

We know that many prefer their thrash to be serious, angry, filled to the brim with socially/politically conscious thoughts on significant topics in current times. Others just want to rock, crush, and entertain – which is where Municipal Waste come in. Electrified Brain will cause most to break into sweats, drain you of any worries, and remind you of the great enduring power of crossover thrash.