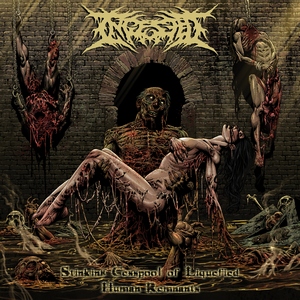 In celebration of fifteen years together as a band, Ingested are starting off 2021 by re-releasing their entry point as a band, their first demo. Available as part of a 3-way split with Crepitation and Kastrated, it’s now being given it’s own release with a complete remix and remastering job. While some of these songs were featured on the band’s debut, this remaster will likely be a sought after piece for Ingested fans.

As Ingested has done a fair bit of evolution since their beginnings, their origins are much more slamming in nature. Stinking Cesspool of Liquefied Human Remnants is brutal death metal through and through. While it doesn’t particularly stand out too much, it never lacks for intensity and certainly has all of the positives that one can find in the genre. Varied and crazed vocals (love the high screams) help to keep it from becoming too blurry with the often frantic riffing that occurs, and the band does move into some grooves as well. “Pre-Released Foetal Mush” is chock-full of massive grooves that all but shake the speakers. All things being said, even at this early stage in the game, it’s clear that Ingested were looking to go further than just slam territory, as the song structures are there – it’s not just a race to get from slam to slam section. For the band’s first release, there’s a rhyme and reason for tempo changes and they occur with deadly thought and efficiency.

While it is a release completely catered to fans, it’s a nice look back at how far Ingested as come in their fifteen years together. It’s a nice trip back into more slam-filled waters, and those seeking this one out will find a release that has been dusted off and remixed/remastered with care.