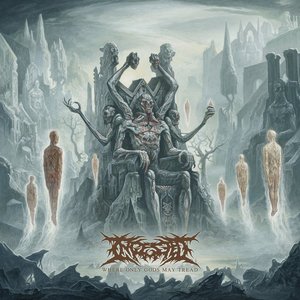 As it has been with previous releases in Ingested’s growing catalog, there’s a clear progression and evolution to their sound. Ingested have made some great strides from their early slam beginnings into a more multi-faceted death metal machine over the years, all while continuing to strengthen their ‘take no prisoners’ attack. Where Only Gods May Tread easily sits as the band’s crowning achievement thus far.

The two finest examples of the band’s continued evolution would be that of “Another Breath” and “Leap of the Faithless.” “Another Breath” has some genuinely gloomy and melancholic tones to it, and also features Crowbar’s Kirk Windstein to add to the sorrow. But even without his vocals, you can hear a real sorrow to the guitarwork in the track, and it’s effectively offset with some heavier and punishing elements without feeling too forced or awkward. The closing track, “Leap of the Faithless,” is a 9-minute monster and it utilizes a lot of melodic guitarwork within to keep the otherwise (mostly) bludgeoning track from feeling too one-note. What’s most impressive about this track is how bulldozing it can still be for an extended period – it’s a real shining moment that’s held up by multiple tempo changes and an emphasis on melodies that emphasize themselves without losing the band’s aggression.

But for those seeking a more straight-ahead beatdown, Where Only Gods May Tread also is happy to accommodate. Opener “Follow the Deceiver” includes some devastating breakdowns and mid-tempo chugs, and follow-up “No Half Measures” is an excellent streamrolling track that also dabbles in some atmospheric melodies in its latter half. “Dead Seraphic Forms” feels like a combination of those punishing breakdowns that band is no stranger to, while still ushering in some moments of frenetic speed and even some airy melodies.

Ingested continue to impress as they climb up the death metal ladder. Where Only Gods May Tread is completely pulverizing in tone, but sees the band strengthen their diversity and double down on melodies, atmosphere, and groove in order to change things up.