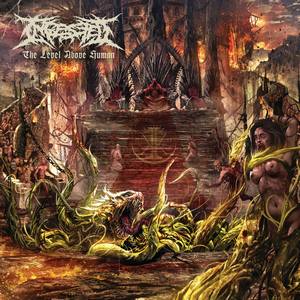 If one thing can be said for Ingested, it’s that they have constantly tried to move forward with each new album. They’ve honed their craft, something that is not a guarantee given the often stagnant sensibility that the slamming death metal genre has perpetuated around itself. 2015’s The Architect of Extinction hinted that the band was looking to do more than just ‘slam,’ and The Level Above Human confirms those suspicions in the strongest possible way.

While the overall formula has not changed, Ingested’s approach to songwriting has gotten notably stronger. This is not a band that writes generic riffs just as placeholders for unloading monster slams in each track. Not to say they don’t have these monolithic moments, but they feel deserved and warranted, allowing them to become more intense and merely a part of something more. In fact, “Sovereign” makes it quite clear that the band are attempting to throttle the listener with heaviness, but not sure during a slow, lumbering groove – there’s high tempo blasts with riffs that don’t necessarily go the technical route but still catch your ear with sleek melodies (and punchy groove). “Purveyors of Truth” goes one step further with melody, while still allowing brutality to reign supreme. “Last Rites” goes for a more atmospheric and dark approach, giving the band a proper build-up before they launch into assaulting speeds, and the closing instrumental “Obsolescent” runs with the melodic structures hinted at throughout and puts them in the spotlight. But with all of these nuances, the heaviness factor still needs to be at the front of the line, and there’s a visceral feeling one gets when listening to a track like “Transcendence of Gods” that Ingested excel at. A solid production helps here, with a modern crispness to it, but it still feels heavy as nails.

Breaking off the shackles that most slamming death metal or deathcore acts restrict themselves with, Ingested have crafted an explosive modern extreme metal release. The Level Above Human delivers chaos and carnage in the right amounts, but also doles out some subtle melodies and catchy groove to keep the whole thing from becoming a blur. Most importantly though, the energy is fun and infectious – sure to open up plenty of pits in the live setting.