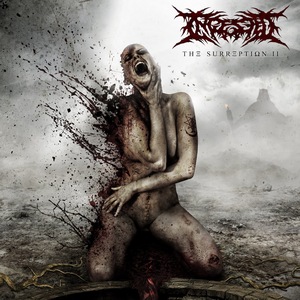 Continuing the pathway that the band opened up early in 2021 with a remastered/rerecorded version of their first demo in Stinking Cesspool of Liquefied Human Remains, The Surreption II celebrates the 10th anniversary of Ingested’s second release (entitled The Surreption, of course). Lots of care has been taken with this one too, providing listeners not with just a remaster/rerecording but some reimagining and modernizing as well.

Ten years later, the first thing that’s noticeable is the production differences. There’s a much more crisp and modern feeling to these songs, for logical reason of course. But it is also done in such a way that you can listen to it alongside the original and see that the original, slammy essence hasn’t been lost. Brutal, slamming sections still go quite hard (“Decline” is a bludgeoning experience). Given the recent reissue of the band’s first material with a spiffy new sound, its intriguing to listen to this one immediately afterwards as well. You can hear a definite shift in the band at this point, something that would be further realized with each album, further away from the typical slam parameters and employing more straight-up death metal and atmosphere. Obviously, 10-minute closer “The Alpha and Omega” is the harbinger, with its build-up and dark, sinister segments to complement the bludgeoning, but even a bruiser like “Castigation and Rebirth” can showcase some more groovy, death metal nods that the band has since further developed. The polished sound on this release helps bring this fact further to the forefront with ease.

Another solid, labor-of-love type of reissue from the Ingested camp. Worth a listen for those who heard it ‘back in the day’ to see how it has been restructured, and a nice starting point for newer fans that want to hear a modern take on one of the band’s first steps.