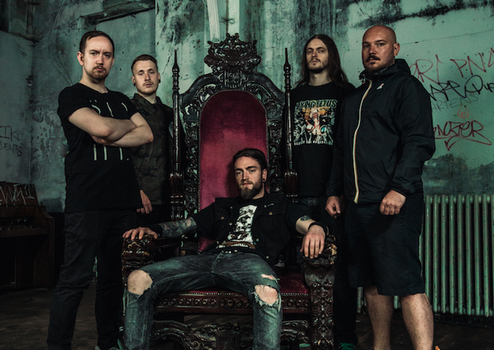 Continuing a steady rise upwards with each new release, Ingested have been making a name for themselves over the past few years within the extreme metal scene. They’ve done it without having to stoop to clichés and revel in slam tropes, instead focusing on strong songwriting and improving their sound at each corner. The band’s latest release, The Level Above Human, continues to see the band progressing their sound – in fact designing something that embraces many different walks of death metal into a cohesive ball of brutality. The band is at the top of their game, and in due time, as they are set to begin 2 months of straight North American touring to support their latest effort. So we reached out to the band to give us a quick update before they go about bringing their brand of death metal across the continent. Read below to see what they’ve been up to for the last few years, their thoughts on the genre, and more.

Dead Rhetoric: In the time since The Architect of Extinction, you went from Century Media to Unique Leader Records. What do you feel makes this new label home a solid fit for Ingested?

Ingested: Unique Leader have released a lot of albums we all grew up listening to so it seemed the right fit and after talking to the team before recording the album we knew that they would work hard with us on The Level Above Human.

Dead Rhetoric: What else have you been up to in the three years between releases?

Ingested: We were mostly writing along with some touring and festivals between America and Europe such as Summer Slaughter Tour, Devastation on the Nation Tour, Gutting Europe Tour, UK Tech Fest, Heavy Scotland among others. We were all working full time jobs in between so there’s obviously a lot of time devoted to that but we’re confident that The Level Above Human will change this for us.

Dead Rhetoric: What makes The Level Above Human your strongest release to date?

Ingested: It’s the ultimate Ingested album, we’ve been around a while now to know what works for us and to create a piece of music that can translate into a crushing live show. If you like death metal then you will love this.

Dead Rhetoric: What exactly would you consider to be the level above human in general terms?

Ingested: It does exactly what it says on the tin.

Dead Rhetoric: What are some of the lyrical concepts that you have tackled with this newest album?

Ingested: It’s about being the best innit. Exploring tyranny, justice, domination and being your own deity.

Dead Rhetoric: With four albums written at this point, do you look towards how a song will perform in the live setting when you write a new one?

Ingested: Absolutely, that was our main focus on this album. We evolved our songwriting on this album so every track would translate to a live setting, no over seasoning.

Dead Rhetoric: You have about 2 months of solid touring coming up in the US and Canada. What are you most looking forward to with such a long stretch of dates?

Ingested: Getting home alive haha. We’re looking forward to seeing some friends, meeting people at the shows, checking out the sick bands were touring with, spending time in the cities and definitely gonna be watching the World Cup Whenever we get chance.

Dead Rhetoric: As a band that brings in influences from a wide variety of extreme metal sources, is it more important that you strike a particular balance rather than fit nicely into a genre-classification?

Ingested: We think its important to just be ourselves and write the music you want to hear.

Dead Rhetoric: If there is one association the band does have, it’s slam. What do you feel are some misconceptions about slamming death metal?

Ingested: That you can’t be creative with it and make it sound good.

Dead Rhetoric: What do you find most appealing about death metal, and what do you feel provides it some lasting appeal to a significant world-wide fan base?

Ingested: We don’t know! We’ve been trying to figure that out for the past 12 years!

Dead Rhetoric: What can you say about England’s current extreme metal scene and its livelihood?

Ingested: It’s definitely not in its peak, the people that go to shows, buy merchandise and generally help evolve the scene will always be the most important to contribute however there doesn’t seem to be much buzz for metal generally across the UK and some people can be very lazy and not bother getting out and trying to enjoy themselves instead of bitching about petty shit in the scene all the time. Us included.

Dead Rhetoric: What else can we expect from Ingested in the coming months, outside of plenty of touring?

Ingested: We will spending most of 2018 touring, we’re working on some things at the moment for the latter part of the year and something special for 2019 but at the moment we’re just taking it day by day as we’ve got a lot of shows to play over the summer.