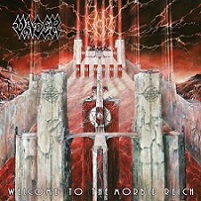 Like vintage wine, the originators of Polish death metal Vader haven’t lost any edge or taste on their ninth studio platter Welcome to the Morbid Reich. When most men at 45 start preparing for a quieter, comfortable and more serene lifestyle, vocalist/ guitarist Piotr Wiwczarek plunges headlong into twisted speed runs and keeping pace with the savage brutality inherit within their stock in trade. This effort continues to balance certain crowd involvement with mid-tempo punishing rhythms against the insane Pawel Jaroszewicz blast/ tom/double bass onslaught.

The low tuned gallop permeates “Return To The Morbid Reich,” the instrumental sections occasionally providing some respite until the next neck breaking riff or lead strains all limbs from incessant spasmodic activity. Piotr’s raw bellows on “The Black Eye” hit your ears persistently as the lines “We came again/ To claim and reign” keep you in rapture with the exotic solo motif and subtle doom/death to speed instrumental dance. Where other death bands sound disjointed when they attempt to put a blast part next to a mid-tempo or doom riff crusher, Vader excel probably due to those little melodic transitions or nuances other musicians can’t (or won’t) unfurl.

And how the main man doesn’t trip over the word spew within “Decapitated Saints” is unimaginable – the verses somehow keeping pace with the motor speedway rhythms and tempo juggling. Not everything is off to the races though, as Vader also know how to write a catchy mid-paced number like “I Am Who Feasts Upon Your Soul” which opens with a simple keyboard refrain and builds from there into a slightly symphonic backdrop until the main jackhammer picking totally destroys your cranium. Thirty-seven minutes later you’ll have to towel yourself off from buckets of sweat putting your body into contortions with this.

It should be interesting as a new rhythm section will tour behind this album, but I doubt the quality of Vader’s music will go down under the watch of Piotr and fellow guitarist Marek Pajek. Those who live for the old school while maintaining down to earth songwriting ethics will embrace Vader again and again.