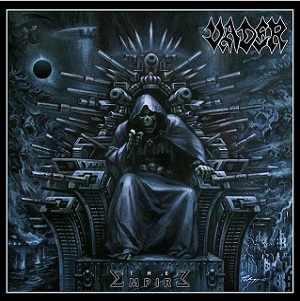 Not sure if this would be considered a slight or not, but Vader have become awfully workmanlike in their third decade as a band. It could be because the bar was already set high during their searing ‘90s days when they put Polish extreme metal on the map, or just the fact that’s a reassurance (in some form) that Vader will turn in a dutiful, focused display of death/thrash without any left-turns or experimentation. An exercise like Behemoth’s The Satanist will never happen, obviously. On The Empire, main dude Piotr Wiwczarek and his harried gang prove yet again they are fleet of foot, and, as indomitable they were 20 years ago.

The Slayer-isms that once clung a bit too close to some of Vader’s previous efforts have been eschewed in favor of sporadic bursts of extremist might. So in the context of quick, direct cuts where song length is not a concern, Vader manage to land multiple blows, starting with the gut-punch of “Angels of Steel,” which features Wiwczarek’s familiar tremolo action and dive-bomb soloing. Wiwczarek’s hearty, steely bellow lends for some favorable chorus moments: “Prayer to the God of War” and in particular, “Feel My Pain” are hardened by the man’s grizzled, distinctive roar.

With little left to prove, Vader continually produce, serving to remind us of who really kickstarted the Polish extreme metal scene, which would be them, in case you were living in a cave. The Empire, in its exacting, slicing nature, finds the Poles simply adding to their massive legacy.