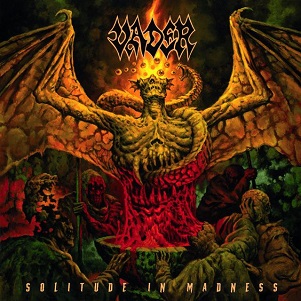 Vader’s consistency has proven to be a double-edged sword. As the first Polish extreme metal band to break onto the international stage, Vader is certifiable legends and pioneers, a fact that should not go undiminished in these ever-uncertain times. However, there are more flashy, technical and provocative death metal bands, the likes which have outsold Vader. None of that — not an iota — diminishes what Vader has accomplished since their 1983 formation. It just makes an album like Solitude in Madness all the more impressive.

Back to the whole “dependable” thing: It is a foregone conclusion the kind of albums Vader will release. They have largely clung to what is essentially a death metalized version of Slayer: max tremolo picking, propulsive thrash beats and scorching solos. The thrash element to Vader is what gives their songs a certain palpability — the brazen, no-forgiveness manner in which album opener “Shock and Awe” careens is the obvious indicator of where things are headed. So when the earth-scorching blast-attack of “Into Oblivion,” the nimble “Sanctification of the Gods,” wind-milling “And Satan Wept” and vertical punch of “Emptiness” chalk up one barrage after another, it’s no wonder Vader haven’t turned their back on what works for them. Why would they?

Solitude in Madness is a tight, no-filler jaunt that comes in under 30 minutes, further proof that Vader isn’t interested in wasting time, nor are they interested in experimenting, nor are they interested in modifying a sound that has served them well for what will be four decades of existence come 2023. There have been times when Vader has been knocked down and counted out, but for anyone who has tracked their career knows that unforgiving and mandatory albums like Solitude in Madness are the ultimate retribution for one of death metal’s most dependable bands.