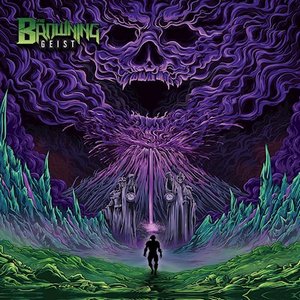 It seems like The Browning has forever been sitting at the cusp of greatness but not being able to take the next step. While their sound has always been quite identifiable with the combination of techno, EDM/industrial dance beats, deathcore, and more coming together, the reliance on clichés and repetitive structures have always left the band sitting in a subpar scenario. While Geist still retains some of these factors, it’s undoubtedly the strongest release the band has mustered together to date.

One thing that Geist does finally get right is to provide some more variation into the mix. Sure, some songs have a more traditional sound from the band, such as the high-energy “Carnage” (complete with cringe-y rap segment) and you can hear the breakdowns coming a mile away – both of the guitar and electronic variety – “Beyond Stone” comes to mind quickly, but there’s some more nuance as the album progresses. More melodic and atmospheric elements have been added in, which fit directly into The Browning’s formula, but leverage more depth than some of their previous material. The title track and “Awaken the Omega” both have more ‘relaxed’ mindset in combining the electronic and metallic components and offer an enjoyable mix and proves that the band doesn’t have to crank everything to 11 every second to make an impact. Even a bouncier EDM-laced track like “Amnesia” still gives the pre-requisite breakdowns but some breathing room makes the track one of the stronger on the release. A more renewed emphasis on clean vocals doesn’t hurt either, with “Noctis,” “Final Breath,” and “Skybreaker” in particular having some soaring moments.

Geist isn’t going to convert many who have avoided the band for their futuristic and danceable fusion of metal and electronics, but there is a new-found sense of maturity to the release. The band truly feels at a crossroads where they could finally make good on the promise that was teased with each successive release with the next evolutionary step.