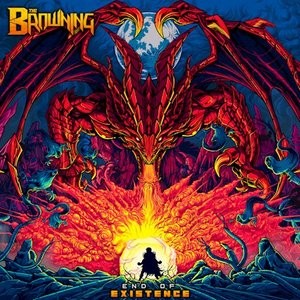 The Browning have always been a band with a unique sound and twist, no matter your thoughts on their output.  The combination of deathcore heaviness with EDM/trance/electronic elements have brought the band to the forefront of a particularly unique niche.  The problem had always been that there were moments of greatness stuck between some bland or uninspired ones.  Previous release Geist seemed to begin to remind this, and The End of Existence further progresses the act in the right direction.

The Browning’s sound is much the way that it has always been.  The difference in the last few years is that they have eased off of the more clichéd elements of their deathcore roots (don’t worry some breakdowns still exist in this space) and allowed the fusion of the two elements of metal and electronica to further meld together into something that’s both brutal and hypnotic.  A chugging bit within “Anticendency” balances off with more atmospheric and chilled out sections to make for a very dynamic listen overall.  Danceable bits in other songs like “Gott ist Tot” or No Man Can Become a God” offer a real refinement to the band’s sound, and these more trippy and atmospheric elements blend in well to provide balance and give the songs more of an identifiable appeal.  The Browning still flexes brutality as needed, like in the aptly titled “Destroyer” (with a massive, earned breakdown) and “Rage,” but the electronic tweaks have continued to improve and give them a more solid backing.  In short, the songs at this point feel more like genuine songs, instead of some of the early tracks by the band that felt like breakdowns string together with electronic elements.

The End of Existence sees The Browning completely nailing their intended sound.  It’s cinematic, danceable, and still completely brutal at times.  It makes for a deadly combination, and The Browning is finally taking full advantage of their unique approach to the genre.