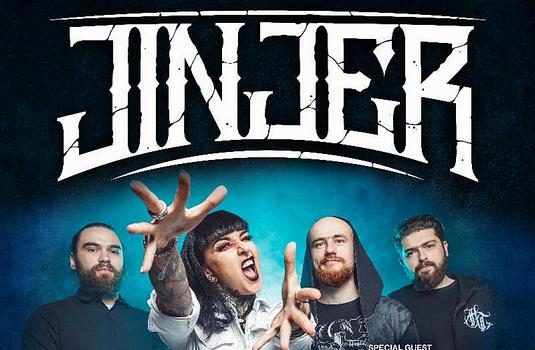 It’s been a while since I had traveled down to the heart of NYC for a show. Sure there were some shows at Saint Vitus in Brooklyn last year, but in looking at my expired credit cards on the ParkWhiz app, it hadn’t been used since 2017. The point here, is that it takes a pretty strong show to make the haul down to NYC (not to mention having some funds in the bank account). But for an unconventional night of heavy metal, the triple-billing of Sumo Cyco, The Browning, and of course, Jinjer‘s first US headlining tour, made a compelling argument. Being a sold out Wednesday night show, I clearly wasn’t the only one who needed little/no convincing to check it out.

On my radar since last year’s “Undefeated” single, finally catching Sumo Cyco was a real treat. Seemingly a perfect act to wake up the crowd from the get-go, the entire band was a ball of energy. Spearheading that front was vocalist Skye Sweetnam, who sang, danced, and grooved from every possible angle and scenario. She was climbing through the crowd, instigating mosh pits, hanging out at the bar and taking a shot, perched atop guitarist Matt Drake’s shoulder (who impressively kept right now playing), wandering atop the seated area, and for the closing song “Move Mountains,” organizing all of the pit into getting on their knees and jumping up at the same time.

But the rest of the band didn’t slouch either – particularly standing out was drummer Matt Trozzi, grooving along, with a persistent big grin on his face while slamming down on the kit. Bassist Oscar Anesetti and the aforementioned Matt Drake rounded things out with plenty of on-stage movement and smiles, as well as Drake having everyone acknowledge the crew. The band played nothing short of an exhilarating set, with recent cuts from their upcoming third album in “Run with the Giants” and “Love You Wrong” as well as some older tracks such as “The Ugly” and “Free Yourself,” not to mention a cover of System of a Down’s “B.Y.O.B.” to round things out in their 40-minute set. Given the band’s massively energetic and fun aura, the crowd was easily won over – and with shows consistently selling out, should hopefully allow their unique metallic/rock attack to garner some more attention.

The Browning have been performing their electronically-enhanced version of deathcore for over a decade now. Coming off of what is undoubtedly their strongest release to date in Geist, their breakdowns mixed with rave-esque beats seemed to be a great fit, given the nature of the tour. Catching the band live really drew attention to the pounding of the band’s breakdowns, in which the pulsating beats mixed with them to really give you a good punch in the chest when they really slowed down the tempo. The band was really moving around on the stage as well, with singer Jonny Mcbee constantly encouraging people to mix things up in the pit or dance it up, leading by example as they tore through cuts like “Pure Evil,” “Carnage,” “Final Breath,” and “Dragon.” Witnessing the band in the live setting really seemed to represent what their music was all about, and it was quite a fun experience in the end.

The sold out Gramercy was quite packed by the time that Jinjer took to the stage. Quite a feat for a band on their first US tour, but Jinjer have been riding high due to their consistent work ethic and willingness to go outside of the usual metal boxes. Both of which were able to justly shine when they started up with “Teacher, Teacher” and jumped right into the brutal “Sit, Stay, Roll Over.” The band felt incredibly tight live – the tracks having a massive presence, just as powerful as they are on disc as Tatiana Shmailyuk led the charge. Engaging with the crowd, she sounded prestine (as did the rest of the band) as they blasted through a 15-song setlist that was just as generous to the band’s past as it was to their most recent material. New tracks “Judgement (& Punishment)” and “Retrospection” show off a more playful side of the band and went over quite well with the crowd, just as content from Cloud Factory (such as “No Hoard of Value,” “Bad Water,” and “Who’s Going to be the One) and King of Everything (“Captain Clock” and of course, “Pisces”).

A lot of variety to the setlist, showing off the diversity makes the band a rich offering to the heavy metal scene. They can devastate with some massive grooves and blastbeats, but tracks like “I Speak Astrology” and “Perennial” have that progressive elegance to them that comes across just as well live as on disc. Just before the last track “Pisces,” the band brought out a cake to sing to guitarist Roman Ibramkhalilov for his 30th birthday – a jovial and fitting finale for an evening of bands that do things a little outside of the box. There’s a reason that Jinjer has been pointed to as being a candidate to carry metal into the next generation, and catching them on the live stage should leave anyone on the fence about this convinced of their potential.