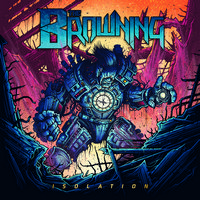 After two albums in the early part of the decade with Earache, The Browning makes the jump over to Spinefarm for their third album, Isolation. Probably a better fit for them with some of Spinefarm’s more recent signees, and no doubt primed to give them some more exposure than they’ve received in the past. However, Isolation seems to be hampered by the same drawbacks that have held the band back in the past.

Many are often quick to dismiss the band, as their brand of deathcore and EDM is a combination that might be considered toxic to the more elite amongst us. However, the band has a quickly identifiable sound and they’ve done a solid job of meshing the two parts of their sound together in order to maximize their heaviness. You can get build-up and tension through the use of the EDM/industrial elements and then they are in free territory to unleash some punishing breakdowns, which can also be amplified by the EDM components. Some of the songs can be downright catchy, like the opening one-two punch of “Cynica” and “Pure Evil.” Both of these songs display what the band does best – danceable rhythms held together with screamed vocals and mechanized riffs and breakdowns (check out “Cynica” in particular on that front). “Fallout” showcases a more melodic side to the act, ramping up the clean vocals and a more atmospheric approach. Unfortunately, the band never really expands further than this. By the mid-point of the album, you’ve heard all of the tricks the band has up their sleeve (save for one), and things become far too predictable. Sadly, the last surprise is a guest vocal appearance of Emmure’s Frankie Palmeri rapping on “Disconnect,” which is bound to cause more than a few to cringe.

Ultimately, Isolation falls into the same category as previous releases from The Browning. There’s a shimmer of fantastic potential lurking just inside the shadows of predictability. They have a unique sound and fresh approach, but it’s unfortunately still in need of a little tweaking.