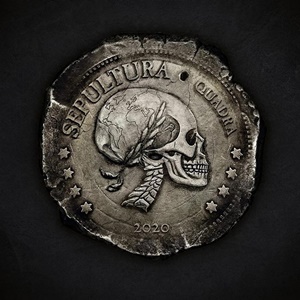 Establishing themselves from Brazil as the premiere underground/extreme metal act, Sepultura never remained stagnate album to album. Consistently incorporating diverse influences throughout their career, even significant member changes wouldn’t stall creative momentum. Their fifteenth studio album Quadra comes at a time where the band celebrates its 36th year of existence, and as such embraces an odyssey through many different eras of the band. Split into twelve tracks and four ‘sides’ if you will, this record incorporates everything from thrash to progressive music, including a lot of their percussion/Latin influences while still being very modern at times and ensures a dynamic aural experience for the listeners.

The first three songs of side A if you will return to a period of Arise/Chaos A.D.-like thrash pummeling, where guitarist Andreas Kisser could crush through his solid rhythm mechanics and vocalist Derrick Green forcefully barks his words like a tiger unleashed – “Isolation” and “Means to an End” sure to cause manic rumblings in audiences worldwide. Possessing a monster kit expert in Eloy Casagrande allows the band to consistently explore Latin/tribal maneuvers for “Capital Enslavement” and the shapeshifting, low-tuned driver “Raging Void” that lovers of Roots clamor for. The second half of the record explores a bit more of the progressive instrumental/orchestral avenues that Sepultura have developed during the post-Max days, showcasing the band’s talent and innovation at executing material that can be heavy and layered but still very groove-forward – as “Guardians of Earth” and “Autem” illustrate. By the end of the record, you feel that extension of Machine Messiah going with songs like “Agony of Defeat” and closer “Fear; Pain; Chaos; Suffering” developing some atmospheric and melodic touches to the proceedings. The lyrical content takes the four ‘quadra’ concept even further, relating to borders, traditions, rules and numerology of countries all around the world – Sepultura always hoping to unite people through the power of their music.

Sepultura doesn’t really have anything to prove at this point, as well-established veterans and respected pioneers of heavy metal. Quadra should erase any doubts of whether the band can still deliver quality material that is memorable, catchy, heavy, and able to stand up to some of the best songs of their late 80’s to mid-1990’s commercial heights. No matter where you came into discovering Sepultura, you should invest in Quadra as this is going to hit many best-of lists for 2020.