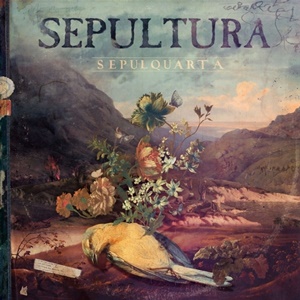 Creating a weekly series of social media gatherings to pass the time due to lack of touring, Sepultura ended up developing an interesting format that kept fans engaged while also creating some unique opportunities for performances. Sepulquarta contains fifteen of these tracks, including special guests from their native Brazil and all around the globe to execute live, on the floor versions of their discography – showing insight into the vast catalog of songs that have made this band special. Safely recording at home gave the quartet a chance to jam with many of their favorite musicians from the metal, alternative, and heavy music communities – resulting in numerous memorable outcomes.

Intertwining the past with the present as far as selections, favorites will ultimately depend on when you got into the band or your preferred records for the group. Ex-Megadeth bassist David Ellefson adds his bass stomp to Chaos A.D. staple “Territory”, while Sacred Reich’s Phil Rind rattles along seamlessly to the thrashy classic “Inner Self”. “Hatred Inside” features three Brazilian female singers ripping the lyrics in a deathly trio, including the work of Crypta’s Fernanda Lira in the mix. A drummer feast takes place for “Ratamahatta”, the tribal sequences working out well against the chanting nature of the vocals that channels the South American heritage that has always been a part of the music. From Devin Townsend to Scott Ian, Matthew Heafy to Alex Skolnick, even Danko Jones and Phil Campbell who appears on the closing Motörhead cover “Orgasmatron”, there is plenty of twists, turns, and jamming taking place over the course of this hour-long plus odyssey. The ethereal flowers coming out of a dead bird’s body within the Eduardo Recife cover art symbolizes the contrasts between the pandemic and the creative birth and musical flow that can come out of this situation.

When we look back at 2020 and 2021, it will probably be two years not long forgotten – and albums like Sepulquarta can be held high as a testament that even in lockdown, humans can survive as long as they put their minds, hearts, bodies, and souls into whatever lifts them for the greater good of all.