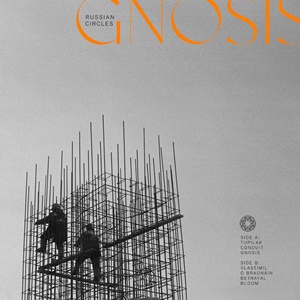 Eighteen years and eight records in, Russian Circles are undoubtedly the Kings of Consistency. You can count on them to always bring emotional, cerebral, and downright whiplash-inducing riff fests juxtaposed with uplifting passages, sometimes in the span of a single song. Gnosis, their newest album, is chock full of gargantuan tunes that warrant the removal of ‘post’, and to simply call them a metal band at this point. It’s their third time working with Kurt Ballou behind the board, and he deftly makes every instrument heard equally, thus ensuring that every track punches as hard as it can.

Gnosis starts out with “Tupilak”, a rolling thunder of menacing drums and true to its namesake, when the curse turns around to bite the conjurer in the ass, the track bares its fangs and rain down glorious riffing courtesy of Mike Sullivan and Brian Cook. First single “Conduit” could easily pass for a Chaos A.D.-era Sepultura song with Sullivan’s onslaught of death metal riffs, and indeed, Russian Circles has never sounded this single-mindedly intent on crushing everything in their path. Dave Turncrantz continues to impress, and his kick drum work propels the song straight into the listener’s gray matter.

Title track “Gnosis” is a beautifully arranged song that starts out quite slow with some gently plucked guitar lines, holding you steady before it reaches its wall-of-sound climax that’ll leave you wanting more. “Vlastimil” cranks out sinister black metal inspired assaults before the interlude “Ó Braonáin” brings a moment of rest, just in time for “Betrayal” to come lurching and knock the listener senseless with its unmitigated sensory assault. Closing track “Bloom” is the proverbial light at the end of the tunnel, and a fitting end to a record that dragged the listener through filthy sonic trenches.

If there’s one thing you can fault Russian Circles for, it’s that their songs have that unmistakable identity that leads to a bit of homogeneity; but when the songs themselves sound this magnificent, layered epics that take the listeners to epic journeys through vast soundscapes of the mind, then all is forgiven. Give me more.