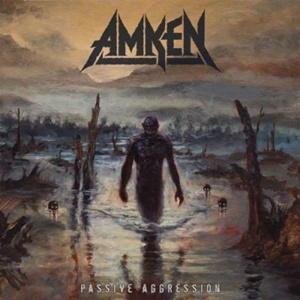 European thrash has blistering appeal, often injecting different levels of finesse and proficiency into the expected speedy riffs, gang vocals, and steady, pummeling tempos. Throwing their hat into the ring from Greece, Amken released a debut EP Adrenaline Shot in 2014, signing with No Remorse Records who issued the follow-up album Theater of the Absurd in 2017. Now moving onto Massacre Records, it’s been five years that listeners have awaited the second full-length for Passive Aggression – and for those who love a mixture of catchy, Bay Area elements full of stellar guitar interplay as well as some heads down ferocity that contains South American/Teutonic traits, there’s some serious neck whipping material on tap.

One listen to tracks like “I Am the One” or “Bliss” and you’ll clearly hear the sophisticated chops, tasteful guitar melodies, and stunning array of riffs/transitions that Giannis Karakoulias and Vanias Apostolopoulos peel off through their minds and hands – aspects from Metallica to Heathen, Sepultura to Kreator and Paradox coming to the forefront. Cultural riffs sprout up occasionally, as well as the faster blast beat sections to add extreme nuances while still being ear-pleasing for “We Came for Nothing”, the background gang vocal accents plus calmer, clean/tribal-esque start shaping the track as a dynamic roller coaster. Lyrically tackling the battle between humanity’s inner self and the hate, fears, and stereotypes that society tries to throw at people, most listeners will enjoy the razor tight rhythms, intriguing lead breaks (“The Underdogs” a big highlight) and the savage, gruff vocals plus supplementary screams that Giannis and his compatriots deliver. Amken also get in and get out in a quicker than most eight-track record that doesn’t hit the 35-minute mark – with plenty to process, digest, and keep you coming back for those minor details should you want deeper, more intense aural exposure.

Passive Aggression sounds like an album that could have come out in the 1986-1989 period of the thrash scene, seesawing between the heaviness/brutality that certain acts offered and the melodic sophistication and technical prowess to pull off songs that took time (and talent) to express properly. Amken will fire up legions through this impressive outing – leaving us thirsting for more.