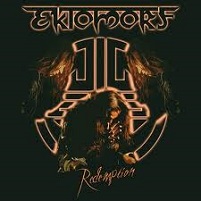 Groove metal is a touchy subject with yours truly. This is a genre that has been overrun with a lot of unfavorable bands

with awfully dull sounds, with few standing out to be anything of interest. Ektomorf is one of those in the interesting category. These Hungarians have perfected a formula of ultra-aggressive, thrashy groove metal that simply clicks. Their latest,Redemption is the group’s 9th thus far, and while there is little variation, is certainly up to par with what would be expected of these veterans.

The album begins with a soft piano intro that adequately sets up the ensuing assault. Noting special, but effective. Songs like the opener “Last Fight,” and “God Will Cut You Down” offer up the band’s trademark aggression, with some ultra-heavy and sometimes thrashy riffing contemplating singer Zoltán Farkas’ raspy growl. “I’m In Hate” is more of a mid-paced track that offers up a solid change of pace, while the ballad “Sea of my Misery” is good for what it is – a simplistic, acoustic-filled song

that shows another side of the band.

The lyrical theme of this album is consistent with what Ektomorf usually cover – namely, struggle and pain. Now, there have been stronger lyrical outings from Mr. Farkas and crew in the past, but it’s also not bad either.

Admittedly, Ektomorf is an acquired taste that has gotten a lot of criticism in the metal community. However, they do well with a style of which many bands have horribly failed. There aren’t many that perpetuate metal with this much groove infused throughout that bring it all together to make cohesive music. Ektomorf consistently accomplishes this. While they’ve been beating the same drum for a long time [you mean the Soulfly drum, right? – ed.], it works for them, and they still are able to conjure up some wicked licks to compliment their signature song structure. Kick back and crank Redemption as it hits hard and gets the head bobbing.