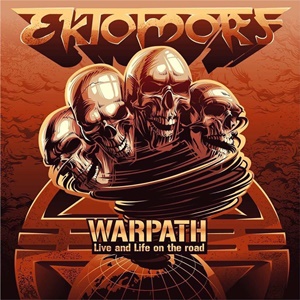 Hungarian groove metal veterans Ektomorf performed at the prestigious metal mecca festival that is Wacken – capturing their hour long, 2016 set for this CD/DVD package. Churning through an 11-song set list that reaches back into their ten-plus album discography, it’s easy to assimilate similarities to Soulfly or others of that alt/groove metal ilk when hearing bouncy musical hooks and almost tribal-oriented energy while airing “Ambush in the Night” or “Leech”. Guitarist Zoltán Farkas possesses the right barking/commander in chief cheerleading necessary to keep the audience engaged vocally, while his bandmates slam home those low-end driven riffs and slamming grooves. They even get a special guest live appearance from Cannibal Corpse’s George ‘Corpsegrinder’ Fisher for the Aggressor song “Evil by Nature”, reprising his tradeoff role from said record.

The DVD portion contains an additional hour and a half road documentary – also a good selling point to give the followers more insight into inner band workings and how these musicians handle road life. Outside of providing picturesque scenery for specific context (band’s hometown, parents houses, rehearsal spaces), you’ll learn more behind the unusual Latin-oriented band name, the work with producer Tue Madsen, the history regarding the current lineup and so much more. Entertaining highlights include their visit to a Budweiser brewery in the Czech Republic, a look at Zoltán’s guitars and backline that he typically uses on stage, and a scary sampling of frog from an Oklahoma gas station while on their US tour from 2016. It’s interesting to see the band’s perspective on building their audience club by club while also reaching as many fans as possible all over the globe – as well as how they handle the workload considering second guitarist Tomi Schrottner lives in Spain. Not everything is perfect – the in-fighting does occur – but the band is quick to recover as the family environment keys in on the enduring appeal.

The value in Warpath: Live and Life On the Road comes from the visual aspects – Ektomorf continuing to play their groove/alternative metal with passion for their legions. An attractive package for those seeking deeper connection to the humans behind the music.