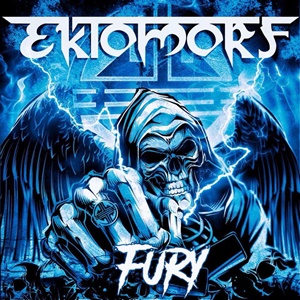 Revamping the lineup that’s been Ektomorf for the past three studio albums, vocalist/guitarist Zoltán Farkas shows no signs of slowing down his neo-thrash/hardcore crossover beliefs for Fury. It’s understandable that plugging away as a mid-level touring outfit comes with a great deal of sacrifice away from family, friends, and probably isn’t fiscally lucrative in the long-term for all parties involved – so we welcome guitarist Szebasztián Simon, bassist Attila Asztalos, and drummer Dániel Szabó to the fold. While the membership may change, the style remains the same – lashing out lyrically for political unrest and social injustice for a method of strength and survival, while musically keeping things groovy, aggressive, and primal.

Choosing to deliver a rather straight-forward thrash number out of the gate for “The Prophet of Doom”, it’s encouraging to hear a shorter breakdown before the frantic lead break, sure to be a crowd-pleaser when Ektomorf attendees hear this blasting from the stage. The militant follow-up “AK 47” steamrolls due to the low-tuned rhythm charge and Zoltán’s forceful bark – channeling the best work of Max Cavalera once again from his 90’s Sepultura to Soulfly discography. Tribal gypsy inflections pop up during Dániel’s double bass rolls plus specific cymbal/snare hits – taking “Bullet in Your Head” into that circular, swinging motion for massive head banging (plus profuse sweating) due to the energy release you’ll get out of this. It’s possible that the fresh blood pushed Ektomorf into more aggressive and up-tempo pastures, as “Infernal Warfare” illustrates – but those that want the low-tuned, groove-heavy arrangements that encourage gang chorus participation while the bass / guitar combinations cause intense spasmodic action, look no further than “Blood for Blood” as the Fury master class exercise for songwriting (love the surprising blast beats for dynamic differentiation).

Produced once again by Tue Madsen, there isn’t necessarily anything out of the ordinary for Ektomorf – it’s more a case of playing to their strengths and executing at a higher level than ever. As a result, Fury should keep Soulfly on their toes, and certainly appeases those who may be cringing at the latest Machine Head record.