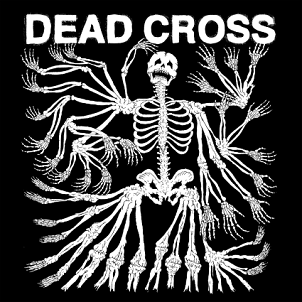 Ex-Slayer drum maestro Dave Lombardo teaming up with Faith No More banzai throat Mike Patton is not a new happening. The two joined forces in the odd-ball Fantômas, an outfit that also featured members of the Melvins (another Ipecac band). A Mr. Bungle-like impact was expected but never quite achieved, although the band’s application of a set “theme” to an album was certainly of merit. Ever the active one, Lombardo put Dead Cross together with Mike Crain (Retox), and bassist Justin Pearson (the Locust, Head Wound City and Retox). After original vocalist Gabe Serbian departed, Lombardo recruited his old Fantômas buddy Patton, with the ensuing self-titled album being their first actual release.

Hardcore punk is perhaps the real gear-churner here, with some bits and bobs of thrash, no doubt benefitting from Lombardo’s masterful touch. Patton, per his long-standing habit, overloads these songs with his multiple vocal stylings, going from kamikaze screams to uncomfortable murmurs. In turn, cuts like “Seizure and Desist” and the particularly menacing “Grave Slave” are demented slabs of free-form hardcore-on-metal, while “The Future Has Been Cancelled” is perhaps the best example of what happens when Patton is turned loose over grinding music. He’s simply uncontrollable.

There’s going to be increased scrutiny any time two veritable titans of a given style align forces. Lombardo and Patton are no doubt used to being put under a microscope, which makes the frenetic, slightly avant-garde angles and shapes of Dead Cross all the more understandable. Convention was never a strong suit for either Lombardo or Patton. Dead Cross simply reinforces that.