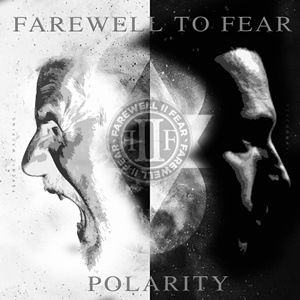 Aiming to bring a mixture of alternative/90’s-oriented metal influences to a modern audience while also throwing a few outside brash (and thrash) elements to the table, Farewell to Fear have been making a mark on the scene with their first two albums and EP. They’ve been played on Howard Stern’s Sirius XM show, performed on Chris Jericho’s Rockin’ and Wrestling Rager at Sea Cruise, and done tours across North America and Canada. Polarity is their third album, featuring nine original songs plus a closing cover of “Surprise! Your Dead” from Faith No More – and its easy to hear through numerous playbacks why these gentlemen seem to be gaining ground across the modern hard rock/heavy metal platforms.

At times the material has more of a straightforward, hard chugging aspect that comes from the older Metallica, Anthrax, or Pantera schools – even with the computerized-vocal effects during the chorus for opener “Powertrip”, the main riff and slamming instrumental breakdown tailor made for massive pit meltdowns. Darker, lower overtones along with a Layne Staley-esque vocal delivery from Mike Craig penetrate the obvious single “Brainwashed”, while the djent/staccato-oriented music/vocal shifts during “If Tomorrow Never Comes” along with the electronic/cyber rhythm textures could be another future favorite. A tribal tempo start shifts into a quick hitting word spew for “Fall in Line”, the militant chorus snapping any naysayers into shape, the shredding / tapping plus circular lead break action from Tommy Gibbons as propulsive as the main musical movements. Are there times where the band maybe lean a little too obvious with specific vocal lines and half-time, bouncy rhythms to an established artist like Bullet for My Valentine on “Forgive It All”? Yes… but the good outweighs the predictable. And for those youngsters unaware of the greatness that was Faith No More during the late 80’s/early 90’s, the closing cover from their blockbuster breakthrough album The Real Thing, you’ll get a slightly heavier version, Mike executing some savage screams and sadistic biting verses while the layers of rhythm guitars punish the aural landscape.

Polarity is the type of release that teeters between conventional, commercial metal and 90’s alternative influences, but benefiting from that lower tuned tone and modern production approach. As such, Farewell to Fear will be one of those bands that appease some, only to displease others – but don’t discount their ability to craft some memorable tracks in the process.