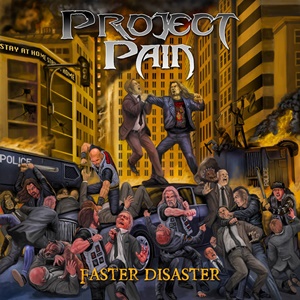 Dutch act Project Pain delivers a steady diet of speedy riffs, spirited leads, vicious vocals containing the right mix of angst/melody, as well as a rock-solid rhythm section foundation on this fourth full-length Faster Disaster. Active since 2011, the quintet has gone through their fair share of lineup changes – although guitarist Guido den Hoed plus singer Bauke Goudbeek have been there since the start. What listeners can expect over the course of these eleven tracks (including a short hitting 39 second “F.Y.Y.F.” bonus track) is a very late 80’s sounding infusion of old school thrash, setting sights on a heads down gallop-infused base, laying down heavy hitting relentless parts, easy on the brain choruses, and effective bone-crushing musical action that followers of Exodus and Nuclear Assault would dig most.

Thankfully abandoning any normal intro as they just get down to business in blitzkrieg, almost off the rails fashion for “Val Kapot”, the abilities Bauke exudes to mirror the intense bullet train guitars/drumming gives the record that energetic opener thrash mavens champion. An old-timey musical soundbite gives way to a crushing anthem template for “Mean Metal Machine”, the triplet transitional shift along with additional falsetto-esque vocal parts taking this arrangement into more classic/traditional metal nuances a la U.D.O. or Iron Maiden. The steady, battering ram precision certain songs deliver elevates Project Pain beyond the basic framework of their chosen style into heart thumping, chest beating glory – even the special cymbal hits or bass lines in sections of “Fields of Death” pulsate in left field angles, while the lead work contains a mix of shredding, whammy bar, and emotionally relevant action. Classical touches enter the fold for the “Presto vs Metal” instrumental that appears serving as a tasty rhythm buffet where battle swords signal the beginning strains of “Die in Peace”, ‘steel against steel/ steel through flesh’ resonating as the musicians wield instruments as aural daggers.

Expect certain cliches to abound – the Ed Repka-styled cover art from Five Miligrams, the swirling grab bag of riffs that take you back to 1986-88, the barking vocal delivery that lurches at syncopated paces to the tempo placed before them all alert you that Project Pain aren’t aiming to create a new field of thrash. They just adhere to their ideals about the genre – probably seeking like-minded individuals that will also appreciate this type of songwriting. Quality wins in the end here.