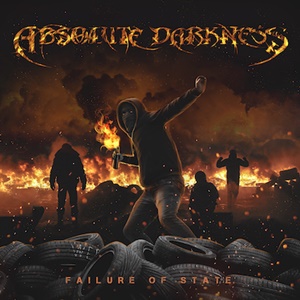 Combining death/thrash influences, Bay Area band Absolute Darkness arrived on the scene in 2015. They’ve released two albums to date before this third effort Failure of State. Changes abound in the four-year interim between records, as there’s a new lineup of musicians plus stronger production values that hopefully will garner more buzz/ attention for the group. Listeners can expect a host of influences far and wide, the riffs very sharp while transitions can be sudden as well as surprising, while the death growls give the material that added underground appeal.

The political/socially-driven lyrical content comes from expected norms for the genre – handling everything from income inequality and unsubstantiated rumors/conspiracy theory spread about through social or major media outlets to dictators or war-oriented actions. Being products of a movement that spawned the 80’s thrash originators, it’s not surprising to hear the approach to specific guitar parts in “Sanity Is Gone” plus “Mad King” tend to have aspects of Testament, Exodus, or Slayer – the differences often being transitions that can be more epic, darker, or diverse due to the lower, yet discernible growls employment from guitarist Ron Dorn. He along with lead guitarist Douglas Vetter II hold down the rhythm/lead duties adequately, executing some circular melodies that capture your headspace easily on “My Forever Rule”. The quartet also reference Amon Amarth-like atmosphere here and there musically, in terms of tempo choices and transitions most notably for the closer “On My Way to Death”. Where the band loses momentum for the bulk of the record comes in the persistent use of specific double kick / snare combinations that sound a bit more clinical, or digitally driven, than a human should sound – check out the title track or “The Republic” for evidence of spots where stronger drumming could have made the other parts a little more energetic and memorable.

Maybe it’s a case where more seasoning with this current incarnation of members will pay dividends for the next release. For now, Absolute Darkness in terms of Failure of State is adequate but not overly mandatory death/thrash to take as a work in progress.