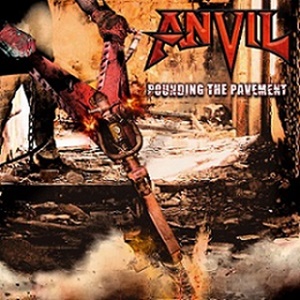 Churning along steady and firm, Anvil are not an act to rest on their laurels. Guitarist/vocalist Lips and drummer Robb Reiner as childhood friends are now in their 60’s, releasing their 17th studio album in Pounding the Pavement. The second record with bassist Chris Robertson, it’s not like the trio aim to throw any screwballs into the traditional, heavy/power metal formula – instead riding their old school influence wave for all its worth in this set of tracks. You are always bound to find something of favor and other elements that make one snort or chuckle, but this is unmistakable in its metallic stance.

Let’s get the lyrical topics and nursery rhyme schemes on the table – because writing a song about a female GPS program for “Bitch in the Box” brings up a valid frustration, but with lines like ‘follow directions/listen close/do what she says, don’t be verbose’ you just feel Lips painstakingly grabbing the thesaurus and squeezing out words without proper delivery or flow to the music on hand. Never mind the back and forth Alaskan tale against a doomy/semi-marching riff parade for “Nanook of the North”. It feels like many of the riff patterns and tempo sequences take on these musicians’ early childhood heroes and flip the script into a crunchier, aggressive sound – as many 50’s/60’s rock elements push “Ego” and the Chuck Berry-like bluesy runs for “Rock That Shit” to yesteryear appeal. You’ll also get a featured title track instrumental that showcases cowbell accents and shapeshifting layers of guitars a la “March of the Crabs”, plus a “Creeping Death” style intro for “Black Smoke” – which makes you wonder who really borrowed from who in the grand scheme of things?

Anvil live on the back of Hard ‘n Heavy, Metal on Metal, and Forged in Fire – three records that set the stage for early speed/thrash to gain momentum. At this point, Pounding the Pavement panders more to a legion of followers already indoctrinated into the fold, rather than planting seeds for new recruits to march into battle. There are a couple of worthwhile instrumental sequences during “World of Tomorrow” that prove Lips and Robb still deliver the goods – you just wish they would consider a little more quality control in 2017 to up the song quotient in favor of those classic, little to no filler efforts.