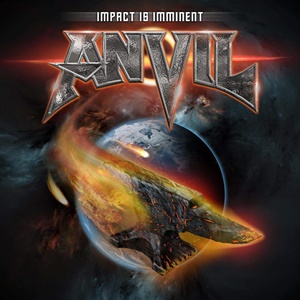 Ardent metalheads probably remember the album title here as the fourth full-length for perennial thrash legends Exodus when they moved up the ranks to Capitol Records back in the early 90’s – but here we are in 2022 with the 19th studio album for Canadian metal veterans Anvil for Impact Is Imminent. With 40 years plus under their collective creative belts, Lips and Robb Reiner (along with bassist Chris Robertson) have nothing left to prove, continuing to march to their own influences while churning out a mix of steady anthems that rock – plus injecting a bit of swing and doom when called for against their normal heavy metal and speedier fare.

Lips sharp wit tackles a mixture of social injustice and current event topics that he feels the need to point out – including who you should trust for advice/opinions for opener “Take a Lesson”, how people stir up differences in culture, race, or specific groups for “Someone to Hate”, or taking on a wizard persona for “Wizard’s Wand”. Dave Grohl of the Foo Fighters opens the album with his speech done year’s previous at an award’s show honoring the band, the band choosing to throw down a steady mid-tempo stomper that allows Lips to rip out some bluesy leads for an effort in that “Metal on Metal” mold. Old school Sabbath-like riffing makes “Another Gun Fight” a front half highlight, Robb Reiner’s tasteful mix of groove and smartly executed fills always noteworthy to take in. Two instrumentals appear for “Teabag” and “Gomez” – both similar outside of the special horns movement made on the latter – Anvil proving that you can reach back to big band/swing and see some interesting parallels for sophistication and musicianship between that and metal players. Those who love straight ahead, double kick tunes will favor the chugging “Bad Sad of Town” and “The Rabbit Hole” – the versatility though cannot be denied, as the trio execute material with a wide array of songwriting styles and key changes/feel aspects throughout these fourteen tracks.

At this point it’s often difficult to assess whether one album is better than another for a veteran artist such as Anvil. The time away from the road allows Impact Is Imminent a bit more sharpness and attention to those finer details that make for a longer-term appreciation through successive playbacks – thus if you’ve checked out of the discography over the past decade or so, this record would be ideal to plug back into.