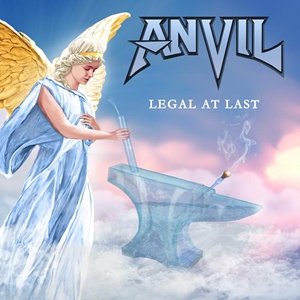 Those familiar with these Canadian legends are well aware of their stance on marijuana – a song like “Smokin’ Green” from 1996’s Absolutely No Alternative made that clear. So when you look at the album cover and title of the band’s eighteenth and latest studio album, the trio are happy that within their homeland, their favorite substance is Legal at Last. Long-time followers aren’t expecting these gentlemen to reinvent the heavy metal wheel – they stride to their own collective muse, churning out a mixture of mid-tempo to slightly speedy compositions and the occasional doom-oriented heavy effort that comes from their mixture of 70’s/80’s influences. How does this latest set of songs stack up next to their past work?

Opening with a bong hit, the title track cranks out old school style licks and an interesting background vocal that aligns with the early days of rock and roll – Lips delivering a killer, complimentary lead break with Eddie Van Halen meets Michael Schenker flair. You’ll find songs that possess similarities to “Forged in Fire” for “Gasoline” or “School Love” from the early days with the follow-up “I’m Alive”, the band hitting solid grooves and allowing drummer Robb Reiner to shine where he can with his quick hitting, progressive/jazzy-oriented mechanics that put him at the top of the metal class. Certain tracks just automatically get the blood flowing and hands pumping high to the sky, be it a catchy main Lips riff and complimentary Chris Robertson bass lick and Robb Reiner drum groove during “Glass House” or the bluesy hard rock crunch that keeps UFO front and center for “Bottom Line”. The nursery rhyme/melody aspect to Lips as a lyricist and the way he phrases things will also be with Anvil until the day they vanish from earth – and it’s probably one of the biggest aspects to keeping the band at a cult but never larger than that appeal (cringeworthy line of the album: ‘what’s yours is yours/what’s mine is mine’.

Topics range from pot-related crimes during “Nabbed in Nebraska”, government pollution with “Chemtrails” to environmental packaging and waste for “Plastic in Paradise” – Anvil never at a loss for airing their grievances in a common man vernacular. Legal at Last isn’t the best Anvil record (check Metal on Metal here), yet it’s not the worst either (Hope in Hell). Which probably sits just as well for most fans of the band, who wouldn’t want things any other way than the Anvil way.