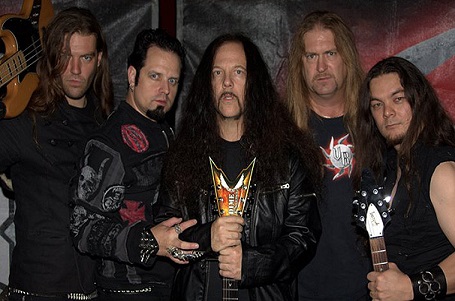 Growing up in the 1980’s pre-digital record store age, I would often maximize my entertainment purchases through a deep scouring of the cut out bargain bins. One of the American acts I discovered through those bins was Vicious Rumors, a California metal act with strong, powerhouse vocals, a guitar team that could wheel and deal from a traditional and speed metal template along with a rhythm section who knew how to lock in the groove. They established a sound not heard very often at the time as thrash and glam ruled the roost stateside.

As a result I would seek out their back catalog and tried to keep up with the group’s new offerings, even after losing a major label deal in the United States following their fourth album Welcome to the Ball. In 2013 Vicious Rumors still chugs along like the little engine that could, unwavering in their desire to deliver killer metal. Now signed to SPV Music, their albums are gaining international attention and acclaim once again.

Speaking to founder/ guitarist Geoff Thorpe about the 35 years he’s been playing with the band, you get the sense that his enthusiasm and appreciation is from the right place – genuine, respectful, and not bitter. This was a fun conversation and I’m hopeful that those who have missed out on the band in the past do not let your opportunity go by now, as there are plenty of shows and recordings coming up for the quintet.

Dead Rhetoric: Electric Punishment is the 11th and latest studio album for Vicious Rumors. There was an issue with tight deadlines and your fingers that necessitated additional outside studio session support – can you fill us in on the recording process, the specific deadlines and what exactly happened with your injury? Was it a reoccurrence of your previous carpal tunnel syndrome in 1992 that required two surgeries?

Geoff Thorpe: No, I don’t think so. I have been writing for the new record since we got home from the 70,000 Tons of Metal cruise in January 2012.  I think it was just really fatigue, playing guitar for 35 years there are times when you play for long stretches there can be problems with your hands, your fingers, your arms, or your elbows. An occupational hazard, I had been playing my ass off writing and preparing for the record for months, we started recording the album November 10th, and finished January 14th.

The time was booked so one of my touring guitar players Bob Capka lives in the area, I had him help me out doing some of the rhythm tracks. There is really only one way to fix it, and that’s to give the hands a little bit of a break. No big deal. We spent five years working on Razorback Killers, and we spent eight months getting this new album ready. It was a lot of pressure, but good pressure. We wanted to come out with a fresh new album, and take you on a ride. The intensity of “I Am the Gun,” the dark ballad of “Escape (From Hell)” to the atmospheric “Eternally,” I think the album really takes you on a ride.

Dead Rhetoric: This album also appears to have a slightly more versatile dynamic than Razorback Killers – do you go in with a specific game plan album to album or is it just the changing landscape of life experience that shapes the mood and texture of each Vicious Rumors album?

Thorpe: For the most part they shape themselves. We never really set out and say we are going to make this particular album more melodic or heavier than the last one. Through the writing process the songs kind of present themselves. The only thing that I consciously do is to try to take the listener on a new ride. We definitely have our style in Vicious Rumors and certain things that we stick to – we wanted to come at it from a different point of view. There’s consistency through all of the Vicious Rumors albums, but at the same time no two sound really alike.

Dead Rhetoric: What can you tell us about the songs “Black X List,” “Dime Store Prophet,” and “Thirst For the Kill”?

Thorpe: “Black X List” is a song about some ancient voodoo stuff. The Black X List was a list that was written down where people would cast spells on them, the list was wrapped up and concealed in a doll- when the doll was unraveled the curse was inflicted. Some classic heavy metal voodoo material for that song. “Dime Store Prophet” is about your classic preacher out to make money off of people looking for love and religion in their life but give away money for Jesus, that kind of thing. “Thirst for the Kill” is about man’s instinct to just kill each other – I don’t think that man can help himself, it’s just in his DNA. That’s the short story for that one.

Dead Rhetoric: How does it feel to have vocalist Brian Allen and guitarist Thaen Rasmussen (ex-Heathen, Anvil Chorus) now firmly entrenched in the band?

Thorpe: It’s been good. We made this live album together in 2012, it sparked a fire in the group and we’ve had some great live performances with this lineup.

Dead Rhetoric: Heading back into your past, you started Vicious Rumors in the late 1979 and were one of the first bands regularly playing the local circuit in the Bay Area – what can you tell us about those early days playing metal Mondays at the Old Waldorf, where you would often do very theatrical things on stage such as being brought out in a coffin by monks to bust out charging for the song “Ultimate Death” as an example…?

Thorpe: Oh my god, you really know your history of Vicious Rumors, bro [laughs]! That is a mindblower, nobody has asked me about that in I don’t know how long. I’ve always loved bands like Kiss and these big arena bands that put on these stage shows. I was heavily influenced by that type of stuff too. I got lucky with the coffin – this lady that was putting on a school play actually gave it to me and I had a friend who had a hearse, so it was just like this perfect little storm that would happen. Back in those days I had a wireless guitar unit, so you could hear the coffin and the wireless guitar playing, the crew we had would put stockings over their heads and leather jackets to carry the coffin while the funeral music was playing. Some good times, man.

The Old Waldorf was a great place for bands to play in San Francisco back in the day. They treated us really well, it was a very professional place, everybody had dressing rooms so it was one of the best gigs you could get. That was just a great time for music- I think of Motley Crue, Metallica, Death Angel, Exodus, Testament, Laaz Rockit- we all did those Metal Mondays. When I look back on it now I’m proud to be part of it as one of the bands that stood the test of time, there have been some long-lasting substantial bands that are still going strong today from that scene. Death Angel, Vicious Rumors, Exodus, Testament, we are still going strong.

Dead Rhetoric: When the thrash movement started taking off, did you feel like Vicious Rumors with its more traditional roots and style was sort of like a red-headed stepchild in terms of trying to establish a firm fan base in comparison to acts like Exodus, Metallica, Megadeth, etc.?

Thorpe: [laughs] There’s no doubt that all those bands you mentioned were more in a clique together and Vicious Rumors was outside of that, there’s no doubt about it. We’ve kind of gone down our own road, the interesting thing about us is we are one of those bands within the same album or one-hour set can do a ballad, play some speed metal, we can do an anthem – we have a lot of sides to the band and great musicians in the group. We are able to do a lot of different things and still able to make it sound like Vicious Rumors and I like that.

Dead Rhetoric: To me I consider Digital Dictator through Welcome to the Ball as essential studio albums for all traditional and power metal fans to own. Do you have any specific memories surrounding the songwriting or touring escapades for these records- such as European jaunts with Forbidden, Death Angel, and Savatage?

Thorpe: Those were incredible times. When Mark, Carl, Larry, Dave, and I got together – we knew we had a special combination, but looking back on it now, I don’t think we realized how special it was then at the time. We were following our hearts, Mark and I established this songwriting team and also along with Carl, a special combination. Those albums really cemented our style for Vicious Rumors. I took that forward into the future, but bringing back more of the speed and thrash element into it. The first European tour we did was a total Bay Area package with Forbidden and Death Angel, which was a real special tour. I see Death Angel a lot, we all live about 30 miles from each other but we seem to run into each other on the other side of the world [laughs].