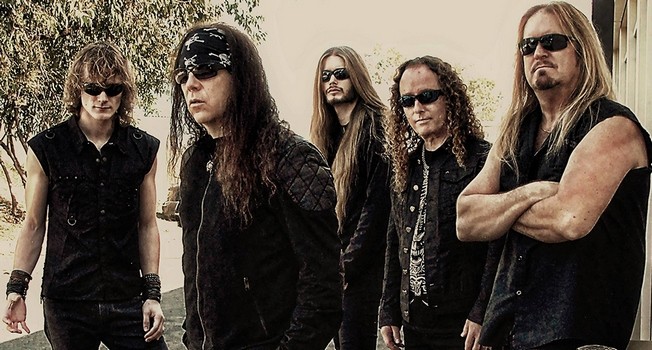 While most of the world reveres the Bay Area for its thrash development that will go down in the annals of metal history, lurking around all that time would be a power metal band that happened to play on the same bills in the 1980’s with the likes of Metallica, Death Angel, and others at those small clubs in the underground: Vicious Rumors. Taking cues from the Judas Priest/ Iron Maiden twin guitar attack, while ramping things up energy-wise to almost thrash proportions, as well as injecting multi-octave vocal melodies into the mix, the band has released numerous pinnacle benchmarks for their genre (this scribe believing Digital Dictator and Welcome to the Ball to be two of the best).

Concussion Protocol is the latest record – another heavy, diverse offering that balances heads down speed on “Chasing the Priest” with a slow-building anthem like “Victims of a Digital World” as well as a darker, moodier ballad “Circle of Secrets” that illustrates the band’s ability to connect at different dynamics and create an explosive, satisfying overall end product. It’s the best of European finesse and American power and aggression wrapped into one – ironic now considering the multi-international membership with vocalist Nick Holleman and bassist Tilen Hudrap entering the fold since 2013.

Calling up Geoff Thorpe in his Bay Area home turf, we tackle the conceptual theme behind the new record (a first for the band in their career), how Vicious Rumors became an international lineup, as well as letting him set the record straight on any misconceptions people may have about his leadership for the group. And if you haven’t caught the quintet live recently – don’t hesitate to buy a ticket to the show, as VR is the real deal at full force.

Dead Rhetoric: Concussion Protocol – what a great album title this deep into the Vicious Rumors catalog! What are some of the challenges that the band faces in terms of recording and songwriting – how do you keep from not repeating yourselves while still retaining fans in the long-term?

Geoff Thorpe: Well, the thing is … for us, all of the guys in the band are fans of heavy metal music. We all like to go to shows still, attend concerts, we are fans of other artists. It’s funny, it’s not like it’s so hard for us to do because we love it. We love the lifestyle, we love the music, we love the action and all that goes with it. For me personally, when we are all working on a new album I’m always thinking about… I really appreciate you saying something about the title, because I thought it was very bad ass. I try to string it together like I think about our last few albums. It’s like a staircase, I’m just trying to keep it going up and moving forward. And at the same time I’m not trying to reinvent the wheel, you know? I’m trying to do what we can do the best that we can do each time, and I’d like to think that we just get better at it after doing things for so many years. I consider it an honor and a privilege to just be able to keep doing this all these years, and because I truly feel that way I put every ounce I can into every record.

The Concussion Protocol experience was the most intense experience by far because we have such an international band now, with a Dutch singer and a Slovenian bass player, with the other three guys in California everything that we do has to be a bigger deal and on a bigger scale now. We rented a house in the Netherlands and we wrote songs together, stayed in Europe for 3 weeks to write lyrics. The riffs were coming out so heavy, we needed lyrics and a story- I wanted to make this a super bad ass heavy metal album. It really comes from passion and surrounding myself with a great bunch of guys, we love it man.

Dead Rhetoric: You worked together on the material face to face renting a house in the Netherlands for a month – is this a preferred method over emailing ideas back and forth and hashing things out through the internet? Do you believe you get better results with that human interaction instantly?

Thorpe: I absolutely do. We certainly could do (the internet thing), but there’s nothing like back and forth interaction together, the excitement. There’s a bit of a sterilization trying to do things through e-mail, it’s clinical. And honestly we use a little bit of that too because we are so spread out, but when it comes down to doing the really important things. We may e-mail each other to start talking about a few things, the body of the music and riffs I started back in early 2015 but by the summer of 2015 I had a good idea of the best ideas I came up with. Once I reach that point, it was very important for all of us to meet together in a room and shoot ideas at each other back and forth. When something works really good you can feel it- the other guys get excited, high fives. If it was all done through e-mails and talking about on the phone, I’m not saying we couldn’t do it that way… but the final result when you listen to this album, you can say that this is a band that is playing together and working together as a group with a group feel.

When it came down to doing the album, we had Nick and Tilen come over to California instead of sending their tracks in, because we wanted to do the album together. I produce the albums with my co-producer Juan Urteaga, and if you aren’t together it’s a longer process. If everyone is right there in the room you can work together quicker and efficiently, you know what’s working and what’s not working. It’s not always the easiest way, but I’m an old school guy- and I think some things are great to do in an old-school fashion. It makes everything we do a big deal- whether it’s touring or recording, and that I really like. I never really had the intentions of the band being so international, we are a California band and we wanted to keep the radius of musicians within 100 miles. That’s the way it was for years- but now it’s a different time. The most important thing in a band is chemistry, and with these guys I realized the chemistry that we have, it was worth going to these extra details and extra expense. Because without the chemistry, what do you really have?

Dead Rhetoric: And do you also map out who is going to do the lead parts in the studio- as for the last few records, you’ve had a number of guest lead guitarists on records?

Thorpe: It’s true that it has become a bit of a tradition. I really enjoy doing that, because Vicious Rumors is a band that really celebrates the electric guitar solo in general. Since we have so many solos on our albums I think it’s cool for the listener to hear a little different flavor here and there. Working with Brad Gillis, he’s been on the last four studio albums- we are friends and we have worked together in a few different capacities. I’m also a big fan and I get the hugest kick out of him coming into the studio and blowing these solos out. When we do have guests, it’s not like they phone in their solos either- we have them come to the studio and we produce their work right there. I don’t take e-mail solos. It’s not like a real plan… I plan to have guests and I wait for the album to take shape and then it becomes very clear to me where to put the guests in the album.

Dead Rhetoric: The record handles a conceptual storyline relating to the world being destroyed by an asteroid. Given the real world ramifications, are you concerned about the way people in power are handling certain issues that could cause this to happen sooner rather than later – possibly during our lifetime?

Thorpe: Absolutely, my friend. It’s funny, I just felt like this was going to be a very big album for us. The energy of the record and when the music was coming out very powerful, I started looking at this idea of coming up with something equally as powerful conceptually and lyrically in that regard. When we did Digital Dictator, even though it wasn’t necessarily a concept album, we were at the beginning of the digital age where things were really changing. I was thinking this time around, unfortunately we live in the age of disasters, whether it’s terrorism or earthquakes, volcanos, and tsunamis, whatever it is. I started thinking about the total annihilation of the planet, and that’s where the main idea came from. I just wanted to create a bad ass metal album and a total nightmare and put them together in one package. And that’s how it took shape. We look at the size of the universe and everything that’s out there, the odds are it will happen at some point- something is going to completely destroy the planet. Of course we hope not, but it’s a real possibility in our lifetime or the short future thereafter. I wanted to come up with a realistic nightmare.

Dead Rhetoric: Tell us about the video for “Take It or Leave It” – it looks like you had a great time mixing up the live and studio footage for this… and will there possibly be a second music video for another track down the line?

Thorpe: There’s absolutely possibilities for that. The response has been overwhelmingly positive to this video. The reviews of the album have been really great too. It looks like there will be more videos coming. It’s something that we have never really done before as far as showing… all of our previous videos have been performance or other things, we’ve never shown people the inside studio things. There have been videos of other bands of course making records, but we’ve never done it before. For us it was something new to show people this is how we do it. And I had the guys there for a very short period of time. We were making that album every day and we made a video- I only had my European guys there for a little while so we were very busy. I had to make a video that I could realistically do in one day, I had one day that I could take away from the recording. I would have loved to tie the video in with the story a little bit more. I’m just glad we got a great response from it, and we do have a lot of fun making these records. It was an intense project, long hours, lots of concentration and lots of going back and forth trying lots of different things but we have a great time doing it. We try to give our audience something different for us, which is us in the studio.