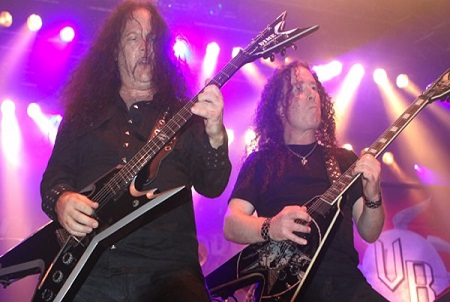 Dead Rhetoric: Was it a difficult time keeping the band alive after the tragic death of vocalist Carl Albert on April 22, 1995? Would there be anything specific you would change about some of those albums in retrospect (1996’s Something Burning and 1998’s Cyberchrist )?

Thorpe: It was hard to keep it going because when you start with the best, the bar is set so high, where do you go from there. Carl is one of the most incredible singers in the entertainment industry, let alone in heavy metal. He was just amazing, incredible range, five-octave, a great ear, pitch, tone, everything- he was a total natural. It was very difficult, the only reason I did the album Something Burning with myself on vocals back in 1996 was due to not feeling comfortable with anyone else. We did try out Brian O’Connor, who ended up being on the Cyberchrist album – and he was great but Carl left this impression on us that I don’t even know if Dio would have been good enough. We needed to do those albums to rebuild the band; it took quite a few years and quite a few singers. Life is too short to give up or to stop. I kept pushing forward.

Dead Rhetoric: I feel like the upswing in terms of popularity for Vicious Rumors (especially overseas) seemed to take place with 2006’s Warball, featuring Helstar vocalist James Rivera and support work from Night Ranger guitarist Brad Gillis. Where do you see the major differences in terms of metal support in mainland Europe in comparison to North America – is it the power of the media with such incredible magazine, fanzine, radio, and distribution support?

Thorpe: Definitely that is part of it. European audiences tend to embrace new things and not discard what they liked before. In America people tend to embrace new things and then they completely move to that new thing, whereas in Europe if people liked something before they’ll still like it and then they can embrace something else with it. People really take their entertainment seriously there, and it’s an incredible blessing for me- we do so much work in Europe and I love travelling. Seeing the culture, saying hello to your friends from Europe because we’ve been going over there for so long, it’s been a fascinating experience and I’m really excited to return to the USA this year from September 18th to October 20th on a heavy metal package with us, Leatherwolf, and Seven Witches. We’ve done some weekend warrior stuff but we are really looking forward to doing a full tour of the USA.

Dead Rhetoric: I understand plans are underway for a North American tour with Leatherwolf and Seven Witches dubbed Metal Masters in September and October, to include at least 30 dates. What are your hopes and expectations, as I imagine a couple of decades have passed since you’ve done this extensive of a tour of this territory?

Thorpe: It seems like all the hard work we have done in Europe is now spilling back into the US and Canadian markets. We are going to do a mixture of classic material and a bunch of our new music – a very well rounded set of 35 years of heavy metal.

Dead Rhetoric: Where do you see the state of guitar playing in the metal scene currently? Do you think there are certain aspects today that are taken for granted that separate the early players from the current generation?

Thorpe: I find the young talent is just incredible, there are some great young players in general. Young musicians are taking things very seriously at a very young age. The scene has changed so much, I believe in the talent. We did some festivals in Italy and there were some young Italian bands that were playing with us and the four opening bands were local groups that had great singers and really talented guitar players, I was very impressed with them. They were coming up to me as if I was the Godfather, I was happy to encourage them.

Dead Rhetoric: I’ve had the good fortune through the years to be able to catch the band at a couple of festival settings such as Powermad and Classic Metal Festival 1 – what do you see as the major differences between Vicious Rumors live versus how you approach studio work?

Thorpe: In recording, we try to paint a picture and incorporate all the ideas to flow in a great way. You are thinking about dynamics and clarity, pronunciation and it’s very involved. Everything is under a microscope. The live show – it ends up being very simple, 100% all-out war. Let’s go to battle – for me, you take all the details that you put in the studio recordings and you kind of put those into your subconscious and re-create that kind of feeling. Live it’s about animal, primal instincts and we want to raise the excitement to the highest level. There are really two different worlds and I love them before.

Dead Rhetoric: You’ve also been able to do some very special shows over in Europe through the years, inviting a lot of special guests, including Carl’s son Kevin performing a few songs as vocalist at Keep It True in Germany. Do the fans really appreciate these special moments?

Thorpe: Absolutely man. Over the last three years we’ve done a lot of really special reunion shows. We did a Soldiers Of The Night reunion in 2009 with Gary St. Pierre on vocals, that was really cool. I never thought it would happen but the promoter pushed me to do it, Gary got a hold of me out of the blue and next thing I knew it was actually materializing. That’s what really made me realize how cool it is to do something like tha t- we have a band that has 30+ years of history and 40 past members, that’s cool to be able to do something like that.

The Keep It True show, was a Word of Mouth reunion with Kevin on vocals, Tommy Sisco on bass, Mark McGee on guitar, Larry and myself. That was really amazing, because Kevin sounds and looks a lot like his father- he was blowing people away. At the Alcatrazz festival in 2011 we had nine former members of Vicious Rumors on stage for the last song “Don’t Wait For Me”- four  guitarists, two drummers, a bass player and two singers, all former members. We had 15-20 years of Vicious Rumors on stage for that.

Dead Rhetoric: How do view the social media spectrum these days- where you are able to put a video on YouTube for many hundreds of thousands of metal consumers to view, in comparison to the challenge of getting your videos seen on Headbangers Ball for more than three-to-four airings?

Thorpe: It’s the way of the world now, it has its advantages and disadvantages. I’m not too happy about the bootlegging part, but I am just happy to still be doing this. The length of our career, I’m happy to be still working and have the chance to use social media. I don’t want to fight it, I just want to embrace it.

Dead Rhetoric: What do you consider some of the best metal albums of all time?

Thorpe: Oh man… God. So many good ones, I always loved Queensryche – Operation: Mindcrime , the first one. I’m a huge Sabbath with Dio fan, so I love Heaven and Hell, Mob Rules, even Dehumanizer actually. I’m a huge Judas Priest fan too. There are just so many good albums there.

Dead Rhetoric: Finally, what does the rest of 2013 look like for Vicious Rumors?

Thorpe: We are starting our tour in Europe in May, doing about 25 shows over there, then coming back in the summer for more festivals, and as I talked about before doing a North American tour in September and October. Non-stop touring, we have plans to make Live You To Death 2,with a completely different set list, and are working hard at writing new material for another studio album for 2014 or 2015. My thing right now is consistency and momentum- sometimes life can get in the way of that, and we have had some serious gaps of down time in the past. In the last 3 years we have put out an album every year, the action from the band has never been greater. I want to put out the best music we can make and put on the best shows that we can do, keep living life to the fullest, man.