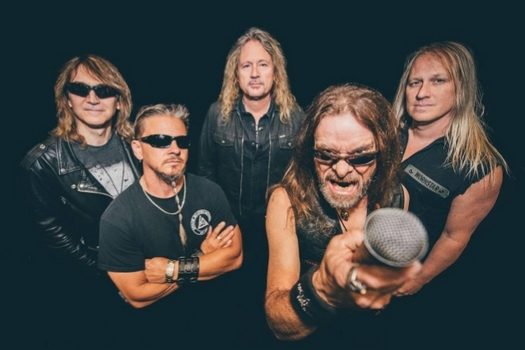 A few weeks before the actual night, a couple of separate tours would end up merging onto The Loft portion of the Chance venue – making this normal downstairs show more of a two-tier, mini-festival event. In the end for the metal consumer, you could witness ten bands for the door entry of a little less than $2 per act – as long as you paid attention to the set times and who was playing where. Since this scribe wisely scouted the stage times and took a photo upon entering the venue, it was clear that a hefty amount of up and down stairs walking would take place to maximize the amount of live metal seen on a Friday night. In the end, seeing at least a portion of nine of the ten sets (sorry Dead by Wednesday, choices had to be made) and viewing four sets in full (including the headliners, Flotsam and Jetsam) kept the metal flame alive for five hours and hundreds of attendees.

Doors at 6:30 meant the first band Death Island went on at 7 pm in the Loft – and Vision Serpent at 7:10 on the main stage. Taking in the first two songs of the former, they are a young three-piece sticking to an abrasive, raw form of death metal still needing to tighten things up a bit – while Vision Serpent held the growing crowd’s interest through their mixed brand of groove/death metal, as “Crime of Regret” would be one of the standouts in their set. Witnessing the band before on a few bills at the same venue, it’s clear the five-piece are cementing their own style, comfortably getting used to the bigger stage and getting a bit heavier in the process. Rapture would go on next at The Loft, a teens to early twenties band standing out due to their blue light band logo, plus the flamboyant nature/imagery of the 80’s with denim jackets, bandanas, and flashy looks (the bassist a dead ringer for Cliff Burton down to his Rickenbacker bass). They would open with a couple of covers – including Annihilator’s “Alison Hell”, something you don’t hear very often from young bands these days and delivered admirably.

Meanwhile Deveria made in roads with the main stage crowd. Joined by old Enertia bassist Joe Paciolla for this live show, the four-piece delivered a solid set of power metal the 80’s/early 90’s way. Elements of Queensrÿche, Sanctuary, Dio-era Black Sabbath, and a bit of Crimson Glory came to mind when hearing “Kingdom of Evermore”, “IX”, and “Ring of Fire” – especially through the multi-octave pipes of vocalist Chuck Woodard. Currently working on a recording that should be ready by the end of summer, it’s clear these gentlemen could make a strong impression not only on the local landscape, but in the European/ Far Eastern press outlets based on their talent and abilities. Voodoo Terror Tribe are a New Jersey three-piece with strong visuals and solid mechanics – a mix of alternative, industrial, and metal influences as you can hear aspects of In Flames, Rob Zombie, and Rammstein in a lot of their work. Quickly seeing a couple of songs, downstairs Last Pharaoh fared much better than their previous outing in the club – sounding crystal clear, their brand of power/progressive metal sharp and on point. They are quickly becoming the ‘must see’ band due to the fiery prowess of vocalist Tommy Santangelo and guitarist Ron Toth – premiering a new song to start while also executing “The Headless Horseman” and “Into the Darkness” to perfection.

By 9 pm it was time to take another trek upstairs to see Vicious Rumors – who I haven’t seen in a few years. Now touring with Nick Courtney on vocals, the band was able to work their way through some sound issues early in the set with drummer Larry Howe (double kick in… double kick out) to wow the patrons through a blistering thirty-minute exercise in power/traditional metal. Nick’s range is similar to the late great Carl Albert – executing stage moves in unison to the words on display. Geoff Thorpe and Gunnar DüGrey are ideal in their axe roles, firing off riff volleys and searing lead breaks, while bassist Cody Green holds the bottom end in place. It was an all old-school set from their first four albums: “Abandoned”, “Minute to Kill”, “On the Edge”, “World Church”, “Soldiers of the Night”, and “Don’t Wait For Me” proving that these veterans are still as tight and catchy as ever. Geoff was thankful from the stage that ‘with all the metal action tonight… you have to pick your poison. I’m glad you choose us tonight.’ Indeed… next time this scribe will need to witness a full headlining set from these gentlemen.

Cloven Hoof probably aren’t much of a name beyond NWOBHM circles – or ardent heavy metal consumers. Bassist Lee Payne is the lone original member left, but he has surrounded himself with a capable lineup including drummer Danny White and vocalist George Call (Aska, Banshee, ex-Omen) among others. Only able to take in the first half of their set due to the downstairs headliners, the material spanned the career of an underrated act of traditional metal – chock full of melodies, riffs, and cultural harmony aspects that got the curious as well as the faithful interested and involved. “Cloven Hoof”, “Astral Rider”, and “Highlander” were three of the numerous cuts to spread delight through the audience – George getting the crowd involved at every chance he could. All metal fans need a bit of traditional, old school heavy metal in their ears, and these guys are the real deal.

Walking down to the main stage at 10:25 pm to the opening strains of “Prisoner of Time”, Flotsam and Jetsam proceeded to peel off a solid mix of material from their vast catalog of power/thrash in 90 minutes. Vocalist Eric A.K. admitted struggling with throat issues which rendered his higher falsettos non-existent at points – but he made up for it in terms of charisma, charm, and his lower/mid-range facilities. Drummer Ken Mary provides a visual array of higher stick flipping tricks, and also delivered a short drum solo – while guitarists Michael Gilbert and Steve Conley kept the axe attack steamrolling and showcased a bit of their playful shred proclivities during an extended section of “Smoked Out”.

The setlist followed a cool ‘new one/old one’ path – meaning that we got to hear songs from the self-titled record and new album The End of Chaos like “Control”, “Demolition Man”, “Life Is a Mess”, “Seventh Seal”, and “Iron Maiden” as well as a great selection of the early years – “Dreams of Death”, “She Took an Axe”, “Desecrator”, “Suffer the Masses” and the obvious set closer “No Place for Disgrace”. The patrons were able to abide by the interesting ‘waver’ we had to sign entering the venue for no moshing or stage diving, but you still saw a decent number of fists in the air, heads banging, and singalong action. In the end, it was another glorious celebration of the power and diversity within the heavy/power/thrash community – proving that live metal provides that fuel to get people through another day.