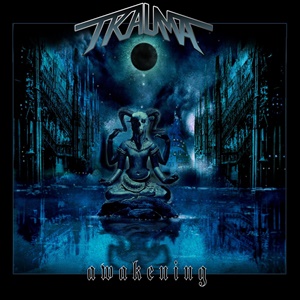 Best known for Cliff Burton’s presence in the demo stages prior to joining Metallica, Trauma released Scratch and Scream their debut album in 1984 on Shrapnel Records before breaking up a year later. Resurrection took place in the early 2010’s with a new lineup, unfortunately losing veteran vocalist Donny Hillier to lung cancer in 2020. Back for their fourth album Awakening, the band recruited ex-Vicious Rumors singer Brian Allen as the group continues forward performing an older style of power/thrash metal designed for those early enough to remember piercing melodic vocals, twin rhythm/guitar harmonies, plus a steady stream of heavy metal tempo heroics.

Expect riffs that possess finesse, bite, and charm – the host of influences pulling from the US and European scenes, as the drumming of Kris Gustofson equally varies between pounding power/groove combination plus speedier/thrashy terrain. The double kick transitions against the progressive, circular twists guitar-wise makes “Meat” an early standout – as Brian ratchets his mid-range to upper echelon pipes in a sinister, Savatage-esque manner for the follow-up “The River Red”. Spots of dynamic reflection or introspection appear time to time so as to not overwhelm the listener – “Falling Down” the biggest recipient to that philosophy, emphasizing sterling vocal harmonies, clean guitar work from time to time during the verses, and engaging musical interplay during the extended instrumental sequence rivaling Iron Maiden/Judas Priest proportions. The additional sound mechanisms of tribal drumming, chants, and loops to open “Voodoo” soon shift into another groove-influenced power/thrash outing, some of the squeals plus main vocal inflections casting more of a modern, heavier atmosphere for the band. Brian’s voice fits the versatility Trauma express in this set of tracks – he can be alternative and eerie as well as hit those prime-time highs convincingly.

Leaning more towards a US old-school power/thrash classification than anything pure from either platform, Awakening does have that sophisticated penchant for proper songwriting that gets heads banging, even if it’s on more of a cult-like status ladder. Probably one for the ardent collectors of Trauma or metalhead segment that delved deep into the 80’s-era of power/thrash.