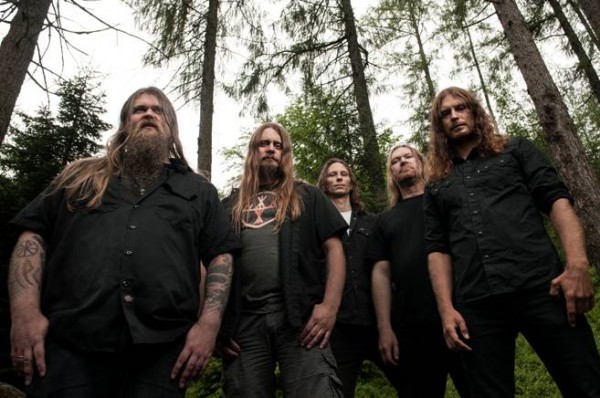 If there is a band that can get away with anything right now, it very well could be Enslaved. Not like they’re going to dump a Cold Lake on everyone, but if the Norwegians decided to make a seismic left-turn into totally unforeseen territories, methinks no one would balk at it. Since the band made the (wise) move away from Viking metal before the turn of the century, the level of exploration and experimentation has been virtually unmatched. The results have been a string of rangy, captivating albums that started with 2004’s Isaand reached a near-apex with 2008’s colossal Vertebrae. Continuing that trend is Axioma Ethica Odini, an album that in time, could surpass its predecessor.

Enslaved Mach III (that would be their progressive era, for those keeping score) is back in heavy mode, looking to topple what was laid down on 2000’s Beyond the Within, this time armed with a totally cohesive unit and unbridled confidence, something head songwriter and guitarist Ivar Bjørnson had no problem pointing out. Blistering caught up with the always soft-spoken Bjørnson to discuss Vertebrae, the band’s working combination, and plans for a 20th year anniversary celebration. Here’s what went down…

Blistering.com: Vertebrae was so well-received, so how did you not only adapt to its success, but prepare for the next one?

Ivar Bjørnson: It was a little surprising, I guess, not because I didn’t think it was a good album, I just don’t have much expectations when we release an album. Music and especially the stuff we’re working on, is such a personal thing. Also, I’m quite content when I finish an album. I knew he had done the best we could with that album, but I was a little taken aback as to how dignified the positive responses were. We went in a mellow direction withVertebrae and a lot of times that can be a red flag for part of the extreme metal scene, but we seem to get away with it. Now I’m curious about how it’s going to work when we go the other way, when get a little harder again with the new album.

Blistering.com: Axioma Ethica Odiniis harder and more aggressive, so did you use the same process where you secluded yourself for months at a time in order to compose the album?

Bjørnson: Yes. Even moreso this time. I’d started to get ideas in the first half of 2009 while we were touring and doing festivals. The pressure started building up inside of my head for these ideas for riffs and the whole album, so at some point in August or September of last year I had to go to an empty house and get it all out on paper and onto my computer. It was an eruption, so to speak…it was really cool. It’s like food – if you have a main course of something and you get fulfilled, you want to go onto something else. So withVertebrae, it was melodic and mellow, that’s when we asked if we were really ready for something else, so that’s when we decided to go in this harder direction.

Blistering.com: Back to the house. Are you the only person there? Do you talk to the other guys while writing? What’s it like there?

Bjørnson: When I go away for longer periods, my wife will go with me. I’ll be in the middle part of the house and she’ll be doing her own work during office hours. I’m not really in touch with the other guys, not until I have sketches ready, so I’ll send it to them via email and some of the guys are really old-school and they prefer burnt CDs [laughs]. It’s pretty much secluded…I really love it. It’s a metal holiday and even though you could say it’s work, it’s great to get away from the cell phone and the world and just focus on the arrangements.

Blistering.com: As for the album, you’re going to get this a lot, but almost instantly, the first thing that sticks out is how much clean vocals are here.

Bjørnson: It’s a pretty interesting dynamic going on there. The more discussion between the two of them [singer/bassist Grutle Kjellson, keyboardist Herbrand Larson] just proved how ego-less they both were in terms of which vocals go where. A lot of times, it’s evident, like this riff needs some screaming vocals. The moment there’s any doubt when one of them doesn’t know what to do, we all just analyze and when they can’t agree, that’s when they ask me about it. The only thing that is not entirely possible is to do a whole album with neither [type] vocals. It wouldn’t be only the black metal vocals and we won’t do one with only the clean vocals. They’re genuine about their interests, but they want what’s best for the song.

Blistering.com: The first album I drew a parallel to would be Beyond the Within. Do you see that at all?

Bjørnson: I could see it a little bit when we started recording. We felt that musically and atmospherically and the hardness…if you can use a word like that, or the darkness of the songs had a connection, absolutely.

Bjørnson: That was one of the first ones to be written for the album. That’s an important one. Right now, I think “Lightening” is important to me. We had to vision to try that before, but we couldn’t get near it, so forming that one, I don’t think we’ve ever come close to something like “Lightening” in terms of doing stuff that’s a little bit outside of our range [laughs]. The dynamics of the song and the whole experiment of trying to glue part one and part two, it was a little bit unnerving.