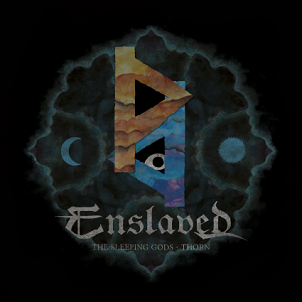 Consisting of extra material from 2010-2011, The Sleeping Gods – Thorn is a classic case of clearing out the creative attic for Enslaved. Recorded in a variety of studios and locales (including the deep Norwegian woods…talk about atmosphere), the set is a stark reminder that Enslaved are still inclined to dive off into experimental fields, for better or worse. If anything else, The Sleeping Gods – Thorn demonstrates the Norsemen have a pretty good idea of what should go on a proper LP, and what should be left behind for compilations such as this.

There is some straight black-prog glory coming out of “Heimvegen,” which is sung entirely in Norwegian, but possesses the same cutting, hearty glow of the band’s current material. The speedy, if not bulldozing “Alu Misyrki,” is another winner, with a lavish synth breakdown, while the instrumental “Nordlys” is bright and pulsating, a prime indicator of Ivar Bjørnson’s firm, unceasing grip on dynamics. But that’s frankly it for the songs that have any impact. The all-synth/soundscape “Synthesis” is a miss, perhaps better suited as short intro; “The Sleeping Gods,” is a clunky, stalled affair, while “Disintegrator” and “Striker” fail to resonate.

No need to expand upon Enslaved’s current, practically unstoppable run of proper album releases. They’re easily one of the best Norway has to offer. The Sleeping Gods – Thorn gets some extra material out of the way, allowing Enslaved to kick the tires on full-on experimentation. At least three of these jams are album worthy. The rest may have to spiral off into oblivion.