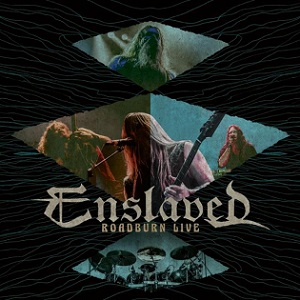 Roadburn Live is somewhat of a bittersweet release considering this is the last time keyboardist/clean vocalist Herbrand Larsen will appear on an Enslaved album. A member of the band since 2004, Larsen’s clean vocals helped corral Enslaved’s sound by giving them something they’ve never had before: melody in the vocal department. We could probably devote this entire review to Larsen’s vocal exploits (his best moment you ask? “Ground” from 2008’s Vertebrae), but the matter at hand is Enslaved’s eight-song live set culled from their 2015 appearance at Roadburn.

Recorded right after the release of In Times, the set, as you would expect, leans heavily on the songs from that album. The instantly-gratifying “Building with Fire” and prog-tested title track are lively rockers, deep without having to go to technical depths, which has been the band’s calling card since Isa. In Times’s best song, “Daylight,” is aired at the middle of the set and includes guest spots from members of Candlemass, Wardruna and Solstafir. Not bad company to be in. Not surprisingly, “As Fire Swept Clean the Earth” and “Isa” elicit the most feverish response from the audience, the latter remaining the closest thing to a “hit” single Enslaved has. A sturdy, rollicking cover of Led Zeppelin’s “Immigrant Song” closes the set.

But it all comes back to Larsen, whose replacement has yet to be named. Enslaved may need to make yet another sonic adjustment should they be unable to find someone to replicate his soaring clean vocals. Surely there are plenty of capable musicians to cull from, but there is only one Larsen. In spite of all this, Roadburn Live closes yet another era for Enslaved in sterling fashion.