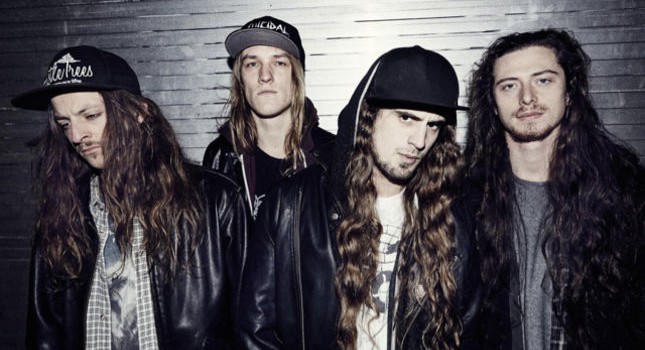 Thrash is not a thing of the past. Although the first incarnation in 1980’s produced a wide swath of bands still known today (Metallica, Megadeth, Anthrax, Slayer, Testament, Death Angel, Kreator, Destruction… we could go on thirty deep or more), it’s not surprising to see a newer breed that have been making a lasting impression on the current generation. More than most are aware of Warbringer, Havok, and Vektor as three bands rising in stature either in terms of fan popularity or critical acclaim. Germany’s Dust Bolt are another quartet of musicians in their 20’s determined to keep the genre alive, garnering attention in mainland Europe rather quickly due to their impressive live performances.

From earning a spot on the Wacken stage in 2011 by winning their own country’s Metal Battle competition to signing with Napalm Records and releasing two albums in Violent Demolition and Awake the Riot, Dust Bolt has the commitment and drive to deliver thrash without compromise. The new album Mass Confusion sees the group expanding horizons a touch – especially with the introduction of acoustic guitars and clean vocals for “Exit” – but their blend of Euro-finesse and American-ized power still reigns supreme.

Fighting through at first a less than ideal Skype connection, bassist Bene M. discusses the decade that has passed within Dust Bolt, special memories meeting Anthrax and touring with Obituary, as well as the passion he believes metal fans have for the genre at hand… in addition to picking up skateboarding as a new hobby.

Dead Rhetoric: Dust Bolt have now been together for 10 years – when you look back from your beginning days as teenagers, are you satisfied with the development and progression of the band?

Bene M.: Yes, definitely I am more than satisfied. I’m really happy and that is what the four of us also feel. First of all, musically we have developed in a direction which we wouldn’t have thought out of when we began. We were quite young back then, Lenny was 12, I was 13 and we were covering German punk songs and then somehow got heavier and got into thrash metal. We had those couple of turning points, like playing Wacken, the German heavy metal festival- I think that’s a moment where we said ‘wow’. This band could work out, and the people actually liked it. One year later in 2012 we were able to sign a record deal with Napalm Records and the development was huge. We have been playing together now as a band for almost 10 years, it is a good friendship that connects the four of us. As a band we meet so many new people and make a lot of new friendships, this is also very satisfying.

Dead Rhetoric: Mass Confusion is the third full-length from the band – how did the songwriting and recording sessions go, and were there any particular surprises or challenges that needed to be worked through? “Exit” for instance is a definite departure from your normal thrash platform…

Bene: The songwriting- Lenny and Nico like to jam a lot in a rehearsal room, which was different because for the first two records most of it was written individually at home and then we connected at the rehearsal room. For this record we did a lot of jamming, as Lenny and Nico live close to our rehearsal room. For Flo and myself it’s not that easy to join them, but we joined them when we could. I think it’s interesting that you mention “Exit”, that’s a song that stands out not only for Mass Confusion but for the band in general. Lenny wrote the song and the lyrics and I think you can feel it is a very personal song. I think what he did is make a piece of music out of feelings and thoughts that came up from him. In the studio we noticed it was not a typical Dust Bolt song, or thrash in general. We were all convinced by the song, and I personally love it. I’m really happy with it.

Dead Rhetoric: Did you know that Lenny had that natural, clean singing ability as well?

Bene: Yes, I did. He doesn’t do this on stage but as we are close friends we hang out with each other a lot, jam or play music together. He rarely sings that way, but I’ve heard him do this before. This will be a surprise, but I hope the fans will like it.

Dead Rhetoric: Where do you come from in terms of lyrical content – do you use current events to fuel a lot of the topics, or look at particular social/political events from the past?

Bene: For one, it’s of course more from the political and social subjects in the present. The title Mass Confusion can represent this, the state of confusion that a lot of people are living in at the moment in this age of overflowing information and overflowing media. That would be us focusing on current situations, I also think that personal feelings and emotions come into the songs and the songwriting. “Exit” again would be a good example of that side.

Dead Rhetoric: Being from the central hub of heavy metal support in Europe, do you see this as being an advantage to gain interest worldwide or is it a struggle to compete against the numerous bands in Germany- even within your own thrash niche?

Bene: We don’t see it like a competition, we see this as a great thing. As you said in Germany in recent years a lot of great thrash metal bands have developed, and that’s a great thing. You can see that the scene is alive with younger people that are still into thrash metal. Of course we play in the same genre, we are close friends with a lot of thrash bands in Germany. There are a lot but it’s still a small scene so you can know of each other really well. We play shows together and its always great fun. The international scene, there are bands we also love. We don’t want to focus on any competition, because that’s a subjective thing. We want to focus on what we do and what we love, and we are looking forward to meeting people who are into the same kind of music that we are.

Dead Rhetoric: Where do you see the major differences between the old school thrash bands of the 1980’s and a lot of the newer generation acts of which you are a part of? Do you think things have gotten back to the right focus on the music and less about a particular image, look, or lifestyle?

Bene: Yeah, that was always a thing about thrash metal. It’s not about a look or an image, it’s about the music. Those are things that have impressed me, looking at singers with makeup or keyboards, that’s just not what I was into as a kid. The thing I like about thrash metal, this is one thing that they were doing in the 1980’s and still exists now, is that it’s a raw form of music, we want to play heavy and the thrash metal spirit fascinates me. You can still feel this legacy from the 1980’s. The difference there is, first of all there are technical differences. In the 1980’s you had totally different means to record a record, and you can hear that on those records. Another difference is that musically a lot has happened, 30 years, you can hear those influences in newer thrash. Maybe it’s not so popular, but we like grunge like Pearl Jam and Nirvana. I think those bands that were said to have destroyed metal in the 1990’s, (they) have an impact on the music now.

Dead Rhetoric: In an interview Lenny did a couple of years back for German webzine Voices from the Darkside, you mentioned that ‘being a fan and being interested in any kind of music or art also.’ Can you discuss this thought a bit more – especially when it comes to easy access to digital music in the modern scene?

Bene: Yes. That is true, but I think you can exclude the metal scene from this statement because the fans are still very passionate about this music. They put a lot of time, effort, and money in it, as I see it. Of course in general, the industry has changed. A couple of years ago, it wasn’t as easy to copy the music, now you can listen to any song any time you want for no money. That has changed the face of music in general. Not only for the receivers, but also for the artists. It’s hard to make a judgement, whether it’s a good thing or a bad thing I don’t know. As most things, it has good sides and drawbacks. I think it’s cool for people… for example I’ve heard of Dust Bolt, I want to check them out, click on You Tube or Spotify and then make a picture of whether you like the band or not. It would be cool though if this person came to our live shows also. It has become easier to access music and I agree with Lenny in some ways that less people put effort in, but there are still people who value the art in the metal scene.

Dead Rhetoric: Do you think you put more effort as a result into the live show and the merchandising aspects of the band?

Bene: In general, I think playing live, performing well and doing the show is definitely the most important thing. Playing live is why we do this, it’s the greatest thing to be on stage. We naturally put a lot of effort into our live shows, we spend a lot of time in our rehearsal room and try to make our stage look cool, and make it look entertaining somehow. With regards to CD sales, it would be an illusion to say we get money from the sales, we make money from playing live, merchandise, those are the ways of income where we can get money. At our stage all the money we earn by playing live or selling merchandise we still invest this into the band. None of us has received any money personally.