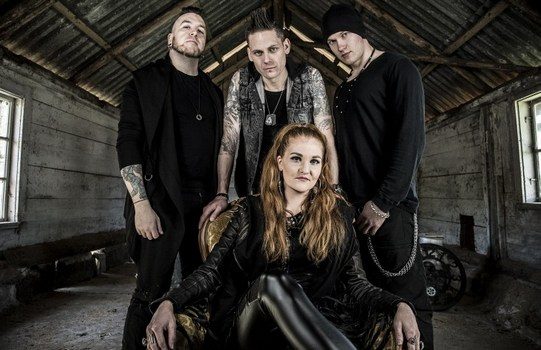 It’s the holiday season once again, and before we start to unwrap our top lists for the year, it’s time for another quick video update. There’s a ton of effort put into metal videos, at both the signed and unsigned levels, so check out what we particularly enjoyed in November: Ad Infinitum, Beast in Black, Cellar Darling, Dust Bolt, Evergrey, Flotsam and Jetsam, Idle Hands, Starkill, and We Are the Catalyst (pictured above – photo by Kenny Boufadene).

Ad Infinitum
“I Am the Storm”
To Be Announced
Self-Released
Some may recognize Melissa Bonny as one of the voices of Rage of Light as well as Evenmore, but Ad Infinitum is the first outlet that the singer/songwriter can call her own. Symphonic power metal fall right into her capable range, with just the right level of riffs and bombast (even a bit of heaviness incorporating her excellent growls), and is a catchy and triumphant track. The video captures the same essence, with Bonny amid plenty of lush (assumingly) Swiss scenery, bringing the listener further into the lyrical journey. It also acts as a preview and reason to help finance a crowdfunding effort for her debut album. If the rest of the material is this strong, there will be plenty of elated backers. – Kyle McGinn (Am Infinitum on Facebook)

Beast in Black
“Sweet True Lies”
From Hell With Love
Nuclear Blast
The first taste of Beast in Black’s upcoming second album, “Sweet True Lies” doesn’t just dip its toes into the ’80s pool, it goes in for a glorious cannonball. Which is precisely what makes it so much damn fun. The combination of power metal and ’80s rock grabs you and simply won’t let go until you are dancing along with it. The accompanying video is just as entertaining, following closely with the lyrics of the song and featuring all of the flashy colors, hairdos, partying, and women you’d expect to see. Probably the most ‘summer’ sounding song/video you’ll hear this winter, and a great preview of what’s to come. – Kyle McGinn (Beast in Black on Facebook)

Cellar Darling
“Insomnia”
Unannounced 2nd Album
Nuclear Blast
The first new music since Cellar Darling’s debut, This is the Sound, “Insomnia” proves that the band does not want to be pinned down in any direction. Notably proggy in tone, with some decisive heaviness compared to much of the debut (dive into the sheer craziness about 1/2 way through), it also floats through some graceful moments of calm as well. But darkness seems to be the overall tone, and it’s an excellent fit to the sometimes trippy and otherworldy visuals that are on display. The video is on par with the rest of the excellent stuff they’ve done, helping to enhance a concept by giving it an accurate visual accompaniment. The band’s ‘magic’ shines through the darkness, and sets up album #2 as one of 2019’s potentially strongest releases. – Kyle McGinn(Cellar Darling on Facebook)

Dust Bolt
“Dead Inside”
Trapped in Chaos
Napalm Records
Slugs, worms, and tentacles – oh my! Those are just some of the sights to behold in the newest video from German thrash act Dust Bolt with “Dead Inside”. While the band perform in a house setting, you get to take in a man driven insane by these visuals in a black and white format. The masked jackal truly leaves the man ‘dead inside’ – his bone chilling stoic face a testament to the activities on hand. As far as the song, it’s a mid-tempo offering sure to bring Slayer fans to the table – especially if you enjoy that “South of Heaven”-period stomp and groove. We’ll see how the rest of the album takes ahold in January of 2019 – as this is fairly safe for the band at this point in their career. – Matt Coe (Dust Bolt on Facebook)

Evergrey
“A Silent Arc”
The Atlantic
AFM Records
The first single from The Atlantic, the newest album of Sweden melodic progressive metal veterans Evergrey, “A Silent Arc” probably will surprise many due to its diverse approach. The almost eight-minute song contains an ambient/quieter intro into a thunderous, heavy riffing montage that embraces a modern/extreme angle before transitioning back and forth between the emotive verses and crushing layers of guitars and thunderous grooves. The visuals stick to one long sequence of panoramic clouds, islands, and the open sea – a stark contrast to anything one would expect as there are no band shots. The mid-sequence narrative and subtle drum/guitar/ keyboard interplay brings back early Evergrey songwriting ethics (Solitude Dominance Tragedy especially). Eleven albums in and still mesmerizing, they truly are leaders of their craft. – Matt Coe (Evergrey on Facebook)

Flotsam and Jetsam
“Demolition Man”
The End of Chaos
AFM Records
Flotsam and Jetsam appear to be enjoying a solid rebirth of appeal considering their 35-year plus history on the scene. “Demolition Man” from their upcoming album The End of Chaos keeps the crunchy twin harmonies and solid Eric A.K. vocal melodies front and center, along with pumping rhythm section work out of bassist Michael Spencer and drummer Ken Mary. Quick cuts of the band performing intertwine against the conceptual footage. The storyline of a mad scientist and a young lady who has mind control/power to light candles and shatter glass at will is interesting – especially when pushed to another degree with a caged hamster only to see the girl trap the scientist in a burning room for the end. These veterans know how to straddle the power/thrash genre and entertain in the process – signaling another strong full-length in the offing. – Matt Coe (Flotsam and Jetsam on Facebook)

Idle Hands
“By Way of Kingdom”
Don’t Waste Your Time
Eisenwald
Also reaching back towards that ’80s nostalgia this month is Idle Hands, but in a different way than Beast in Black above. “By Way of Kingdom” has a darker edge to accentuate the vibes of the rollicking track. The video here seems to ooze ’80s metal to a tee, complete with the darkened atmosphere and use of colors and killer stone walls (a castle?). This one truly feels like you could flip the channels on cable past MTV and find this one on late at night. Yet another reason that Idle Hands should be on your radar if they don’t – the combination of old school metal, gothic, and rock is definitely one for the ages. – Kyle McGinn (Idle Hands on Facebook)

Starkill
“Evil Inside”
Unannounced Future Album
Self-Released
While not as crazy and over-the-top as their previous killer animated video “Until We Fall,” Starkill continue to catch the eyes as well as the ears with “Evil Inside.” Using some flashy images and futuristic visual editing (amid that nice white background) is all that’s required to keep interest while the band rocks out. Their sound has pushed further towards the ‘epic’ with these two singles, launching them into even more unique territory as a band. While they have held onto the guitar shredding, the three-pronged vocal attack has had more of a presence, and deservingly so. “Evil Inside” is catchy, energetic, and bombastic in a way that any modern metal fan can enjoy. – Kyle McGinn (Starkill on Facebook)


We Are the Catalyst
“The Code”
Ephemeral
Ferocity Records
Alternative metal act We Are the Catalyst have been plugging away as we creep closer to the release date of their new 2019 album Ephemeral. The second video released so far, and should be more than enough ammo to get you itching to pre-order. “The Code” presents itself as a crunchy upbeat track with some strong, pulsating electronics to further energize it. The video uses some cool, ‘high-tech’ footage and intrigue to bring the listener in, outside of the band images. Another easy recommendation for modern metal fans, particularly those who enjoy a little rock flavor (think Evanescence) mixed in. – Kyle McGinn (We Are the Catalyst on Facebook)