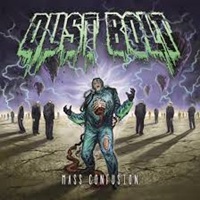 As the third wave of thrash metal floods the market place, the acts with staying power plunge beyond their 80’s record collections into twists and turns that expand horizons while not forsaking the pit making charge that gained attention in the first place. Still in their early 20’s, Germany’s Dust Bolt approach the third album Mass Confusion with surprising confidence and clarity – gaining experience through touring Europe with Heathen and Obituary among others, as well as hitting a boatload of stages during the summer metal festival season.

The quartet love to add in speedy picking with galloping passages which intensifies the energy and tempo changes – making roller coaster numbers such as “Turned to Grey” and “Empty Faces” two standouts as Lenny B. and Flo D. handle counterpoint riffing and team ups masterfully while providing a boatload of neck breaking opportunities through their songwriting. When you normally think of a 69 second track to open a record, an instrumental or atmospheric intro comes to mind – instead “Sick X Brain” is a crossover dream, furious one moment and then crossover gang infused the next. Bassist Bene M. and drummer Nico R. take high gear verses and shift to mid-tempo, tribal/wall of death land on the title cut, where plenty of Kreator-like comparisons could come up and yet it’s so catchy 90% of the audience will not care. The surprise number is track seven – a semi-acoustic/semi-electric oriented ballad “Exit” where the sparse picking and clean melodies from Lenny stretch beyond his potent Teutonic meets Mike Muir roar which is prototypical for a thrash act and into more Mark Osegueda meets Gavin Rossdale emotional capacity. It’s refreshing, heart-felt, and an area this scribe hopes continues to be developed from this point forward – as Dust Bolt take a great hook, build upon it, and infuse it with proper bluesy soloing.