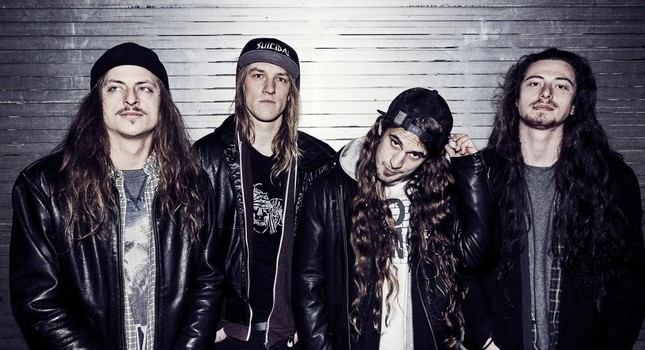 Dead Rhetoric: Tell us about the Hellfest festival in France experience- where you got the chance to meet Anthrax. How was the show and did you get the chance to take in any other sets over that weekend?

Bene: Hellfest was an amazing experience for all of us. It’s a huge festival, so many bands played there. Anthrax of course is one of the thrash Big Four acts, and was one of our highlights. We’ve seen their shows a couple of times before, but seeing them getting warmed up backstage and when we had lunch they sat right at the table next to us. It was a surreal feeling, those are our heroes and those are the guys that made the music that we’ve been listening to for decades. It’s been crazy to get so close to them. We met a couple of friends like the guys from Stone Jesus, but they aren’t superstars yet. At this festival, with Anthrax it was a good opportunity to take a picture. We saw some great shows, Anthrax was awesome as always. Bad Religion, and Rammstein. I’m not a big fan of their music, but the (Rammstein) show was crazy.

Dead Rhetoric: What have been some of your favorite tours or festival shows for Dust Bolt – memories that will stay forever embedded in the brain, either for audiences, personal performances, or special circumstances?

Bene: There are millions of little memories that are embedded in our brains because every show we play is special. A special tour we did was the tour with Obituary in 2014, because we played so many great cities that we hadn’t played before. We played in front of crazy crowds and outstanding ones in Paris. The guys on the tour from Obituary and the other bands were amazing. Those three weeks were crazy and I can’t wait to experience something like this again, to be on tour in such great circumstances. Hellfest will also be one of those shows that we will talk a lot about in the future. The crowd was huge, the festival was overwhelming. All the people we meet after the show, especially when they come up to us and tell us our show was great, the conversation is always something you remember. We have some people that follow us on tour, our thrash crew, hanging out with them is fun. The road always driving in the car, those countless hours, this is also something we always remember.

Dead Rhetoric: Now that you have three albums out, what are the next set of milestones or goals that you would like to achieve to push Dust Bolt up to the next level in terms of success?

Bene: In the conventional way that’s not something we really focus on. Right now we are only thinking about releasing the new album, and playing the club shows that we have already confirmed. We focus on doing our best to prepare for these shows. Success for us means playing great shows in regards for the audience and us. We haven’t talked about our fourth record, our goal is to play live as much as possible in front of as many people as possible. What would be great is to play on a great tour, plus in some countries that are not in Europe.

Dead Rhetoric: Where do you see the state of heavy metal in 2016? What aspects need to change or improve for the fans, the musicians, the record labels, and others to stay satisfied?

Bene: In general, the state of heavy metal is a great one. The heavy metal scene is passionate about the music, no scene is as passionate in my opinion as the metal scene is. This is awesome for the musicians, for the fans as well. I think it’s a great state, I can really see how many metal shows and festivals there are all over the world. It’s very alive and having a lot of fun with a genre that originated years ago. I had this moment in 2011 when we played Wacken and we visited the festival, I was looking at the headlining bands. Those are the bands that have been around (awhile) in the business – Iron Maiden, Judas Priest, Motörhead, Slayer, Metallica- those are bands that have existed for a very long time. Fans are so loyal, but sometimes I ask myself what will be next in five or ten years, which bands will headline? We are a young metal band, but the genre is somehow dominated by those old bands, and they’ve earned it.

Dead Rhetoric: What types of interests/hobbies do you have away from music that you like to pursue when time allows?

Bene: I started skateboarding two months ago, that’s quite funny. Friends of ours also skateboard, so I wanted to do an olly. I tried to do one, and then I bought a skateboard. I’m not good, but it’s fun. I work a lot with young people, teenagers and children, I go with them on trips. For the other guys, our common hobby is still related to music somehow. We are hanging out together, hanging out with friends in common, and someone always grabs a guitar to jam. Music also apart from Dust Bolt is a hobby that connects us.

Dead Rhetoric: What’s on the horizon for the rest of 2016 for Dust Bolt in terms of shows, tours, festivals? Given your careers, do you see the possibility of playing in North American one day – even if it’s on a short, limited basis?

Bene: We will play a couple of festivals in Slovenia and Germany, we are playing some headlining club shows in Germany, a couple of shows in Spain. We will see, there will definitely be a bigger tour. And when it comes to North America, this is definitely one of our biggest dreams to get overseas and play. It’s obviously not that easy, you need working visas and you have to book shows there. I strongly believe that someday that we will play North America. We aren’t really known there, but I think some people in America maybe have heard of us- so we could go there as a support band. But I don’t know when exactly.