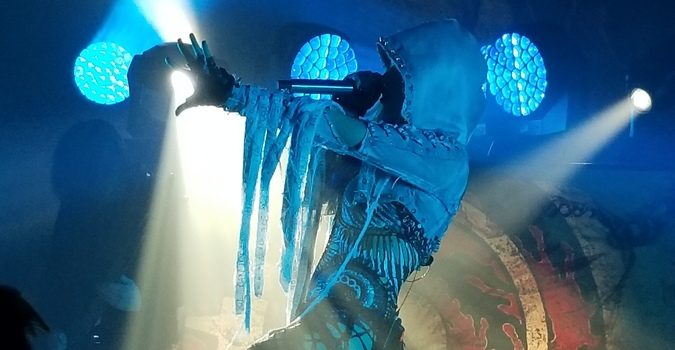 With Worcester working out a bit better for personal scheduling reasons, a weekend road trip was in order to catch Arch Enemy, whom this scribe hasn’t caught since the beginning of their touring cycle for War Eternal. It was odd in some regards with The Palladium itself – lately it seems that every big tour like this one is turned into a mini-festival, complete with an earlier second stage of local acts. But it was also a nice change of pace, as it was a quick, 4-band presence that didn’t leave the listener completely drained from a full day of music.

Heading into The Palladium just as Fit for an Autopsy hit the stage, they had a short but sweet set that focused mainly on their latest release, The Great Collapse. Not having caught the act live since their 2012 run on the Slaughter Survivors tour, there’s been quite a few line-up changes, but the band sounds just as massive live as remembered. The new material (which included “Hydra,” “Heads Will Hang,” “Black Mammoth,” and “Iron Moon”) was perfectly suited to the live arena and they dipped back into 2 older tracks, with “Absolute Hope Absolute Hell” and “Still We Destroy” giving fans a taste of some of their older material. By far the heaviest act on the billing, the crowd was certainly into it, with the rather packed Palladium already getting bodies moving through the pit as their set progressed.

Rolling up next was the English metalcore act While She Sleeps. Not being very familiar with the act, it appears I was in the minority there, as there were plenty of fans eagerly waiting for the act. Their brand of metalcore leans more towards hardcore with some alternative/rock tendencies. A mix that wasn’t entirely geared towards this scribe, but they did put quite a show on stage. Highly energetic, with constant crowd engagement saw that there were probably a number of new fans made that night. The band encouraged the crowd to get into it, and they obliged with pleasure, with some pit action throughout, and a near-constant stream of crowdsurfing for the final song (vocalist Lawrence “Loz” Taylor himself getting involved with crowdsurfing in the band’s set). The crowd was clearly primed and ready to go by the time While She Sleeps left the stage.

Releasing their latest album, The Sin and the Sentence, a few weeks back, Trivium then took the stage for their portion of the co-headlining duties. The crowd already warmed up and ready to move, it didn’t take long into the band’s first track, “The Sin and the Sentence,” to see the Palladium shoving, shouting along, and of course, the theme of the night – crowdsurfing. Featuring four cuts from their latest album, the rest of the band’s set featured a solid collection of cuts from their previous releases. Sticking to the heavier side of things, they played through “Like Light to Flies,” “Rain,” “Dusk Dismantled, and “In Waves” in addition to new rippers “Betrayer” and “Thrown into the Fire.”

Vocalist/guitarist Matt Heafy praised the crowd regularly, and encouraged them to do better than the NYC crowd the night before – going so far as to say it was the best response the band had gotten in the venue before; amusingly calling it a ‘wicked pissah.’ Some special credit must go to “Kirisute Gomen,” where a massive circle pit was in order, and seemed to be one of the crowd’s finest moments (along with the wave for “In Waves”). As for Trivium themselves, the sound was very tight – the band firing on all cylinders from beginning to end. Continuing to push themselves on the live front, their energy was quite palpable. Plenty of smiles all around from the band, as they moved across the stage with plenty of catchy yet intricate melodies. With one of their strongest albums to date in tow, Trivium seems set to truly conquer audiences and bring in plenty of new fans with performances like the one here.

At last, Arch Enemy was up to conclude the night in style. Their first stateside tour serving up tracks from the excellent new release Will to Power, the 15-song set stuck to plenty of cuts from said album and War Eternal (4 from Will, 5 from War). No complaints from this scribe though, as both albums represent the strongest interpretation of what Arch Enemy is about nowadays. The band came out strong, with “The World is Yours” kicking things off in energetic fashion. The three years of seemingly perpetual touring has served the band well, with some strong chemistry between members providing one of the night’s best features. Alissa White-Gluz has definitely come into her own in front of the band, with her acrobatic performance and constant motion giving the band a focal point outside of the showmanship of the rest of the players. In fact, it’s problematic in the best way when watching the band – tough to choose who to focus in on. Guitarist Jeff Loomis provides plenty of his own personal flair, as does Michael Amott. Bassist Sharlee D’Angelo plays off both of them – veering from side to side with plenty of fun interactions with Amott, Loomis, and White-Gluz.

Having impressive performances all-around, the crowd was just as into it. It didn’t take long for the ‘surfing to begin, and White-Gluz repeatedly encouraged the crowd to sing-a-long with Amott’s solos, which was a fun addition to the festivities. Setlist highlights included the thrashing and punk vibes of “The Race,” White-Gluz’s hood-driven performance for “The Eagle Flies Alone,” live mainstays “Nemesis” and “We Will Rise,” melodic breather “Snowbound,” and best of all, the inclusion of the melodic cut “Avalanche” into the mix. Arch Enemy live circa 2017 is a behemoth, with plenty of spectacle and shred for all to enjoy – with the new album and tour cycle in high-gear, one can imagine they will be hitting plenty of countries and hopefully returning quickly for another round of North American antics. But for now, if you dig modern metal and can get to one of these shows, you are going to get plenty of bang for your buck. 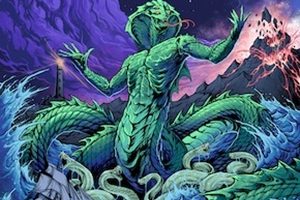