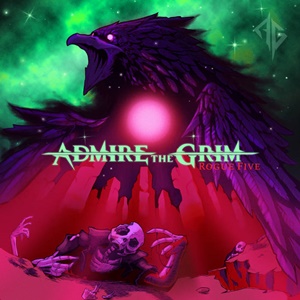 Finnish childhood friends Admire the Grim came together during 2020-2021 through a common passion for 90’s/2000’s-era melodic death metal, setting the story in motion. The five-piece released a series of singles in preparation for this debut EP Rogue Five. It’s quite apparent through initial exposure as well as successive playbacks that these musicians live for Scandinavian melodic death metal – incorporating harsh/clean vocals, a bevy of rhythms and twin guitar tricks, plus potent rhythm section mechanics to provide four mammoth tracks right out of the gate.

The sturdy rhythms, solid melodic runs to crunchy chord foundation, as well as skilled arpeggio sweeps into twin harmony nuances that guitarists Sirja Ojaniemi and Jani Loikkanen unfurl will mesmerize in a way that fanatics into Arch Enemy, older In Flames, and the late, great Alexi Laiho of Children of Bodom expect. One listen to the semi-galloping progressive runs beyond the circular rhythm support during “Mad Queen of the Second Sun” will make most necks strain from hair whipping madness. The follow-up “Admire the Grim” settles into a mid-tempo anthem template, allowing the dual harsh/clean vocal delivery of Katri Snellman to mesmerize, the gothic presence in her melodies beyond the deadly growl lacerations make this an instant winner. Where the band establish a bit of their own flavor is in a song like the title track as the slower, staccato-oriented groove segments in addition to the gang-like shouting in specific, key parts gives the song an added modern stomp beyond the thrash/death riffs and spirited double kick/fill treasure trove master chops at the hands/feet of Tommi Vante.

In a very tidy sixteen minutes, you get a strong sense that Admire the Grim know their craft, excel at the finer details of songwriting/performance, and could develop into one of those future headliners as long as they make the right moves to ascend up the ladder. If records like Whoracle, Wages of Sin, or the first three Children of Bodom records mean the world to your melodic death metal palate, Rogue Five is a no-brainer to add to your collection.