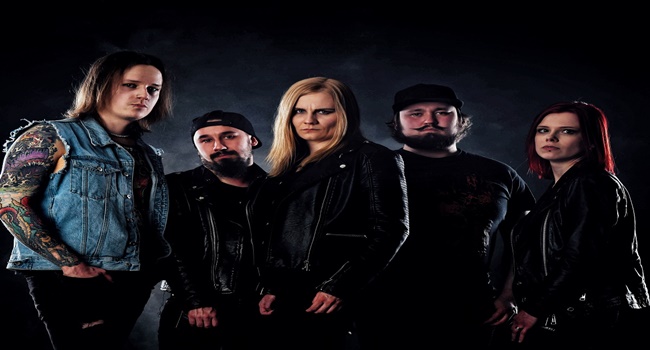 Thorough connoisseurs of melodic death metal at this site, it’s always exhilarating to catch onto a younger band performing in this style. Welcome Finnish unit Admire the Grim – relatively new to the scene since 2021, they’ve issued a series of singles and the recently released Rogue Five EP that contain all the growls, groove-induced rhythms, and guitar melodies/shredding abilities that rival the best Scandinavian acts that put the scene on the map during the 1990’s/2000’s. We reached out to vocalist Katri Snellman and guitarist Jani Loikkanen to bring us up to speed on the early days of the group, challenges with exploding mixing consoles, the party atmosphere surrounding the “Rogue Five” video shoot, favorite albums by Arch Enemy, Children of Bodom, and Opeth among others, plus what’s in the works for the rest of the year.

Dead Rhetoric: What can you tell us regarding your earliest memories surrounding music growing up in childhood? And at what point did you discover heavy metal, and eventually want to perform in a band?

Katri Snellman: My earliest memory is I found an old Elvis cassette in my parents’ attic. That’s the first memory I have regarding good music, rock and roll music. Heavy metal, I think I started to listen to that in maybe ninth grade.

Jani Loikkanen: For me, I think it was when my stepfather brought some CDs for me and there was the first Helloween album that hit me pretty hard. If I remember correctly there was W.A.S.P. as well. Those bands got me into metal music, and eventually I started to play the drums. I did that for many years, and then I switched to playing the guitar. And that’s about it.

Dead Rhetoric: And how did you decide to become a singer, Katri?

Snellman: I’ve always sang since I was little. I started singing when I basically started talking (laughs). I don’t know what it is, but I’ve always done that. When I got into metal music, that’s how I got to do some growls. I like to sing every kind of music, really.

Dead Rhetoric: Admire the Grim began in 2021 through childhood friends and your mutual love of melodic death metal. What do you remember about the initial development of the band, those first rehearsals, and did you know right away the traits or characteristics you wanted as far as style/songwriting, or did this develop over a few months?

Snellman: I think we kind of knew. We all have really different backgrounds in music, but melodic death metal is all something that we all like. That was the common thing. I remember starting the band, it was actually quite easy in the beginning. We found all the players at once.

Loikkanen: I knew almost everybody, except for Katri. We didn’t know each other until she contacted us quite soon after we put the band together.

Snellman: It was pretty fast, forming the band.

Dead Rhetoric: You released three singles in 2022 – how did the recording sessions go for these tracks, and were you satisfied with the reach, response, and feedback you’ve received for this material?

Snellman: We have been quite surprised about the positive feedback that we have had so far from all of the singles, and also the EP that is coming out.

Loikkanen: The recordings took about two weeks, that was surprisingly easy. The mixing console exploded a couple of times, but that was the only major problem. Otherwise, things were quite good.

Dead Rhetoric: How did the mixing console explode?

Loikkanen: It was the power source, the fuse. That kept exploding, and the smell was quite something.

Dead Rhetoric: How did Inverse Records come into the picture for this latest EP release Rogue Five? Do you feel that Admire the Grim has gotten stronger and more confident with this recording – were there any challenges, surprises, or obstacles that came up during the recording and songwriting sessions for this set of material?

Loikkanen: I think so. It was shortly after the music video release.

Snellman: Yeah, the “Rogue Five” music video. And maybe a week after that, we were contacted by Inverse Records. That’s how we started working with them.

Dead Rhetoric: How was the video shoot for “Rogue Five” – it seems to portray different sides to the band between the narrative and performance sequences?

Snellman: It was really fun.

Loikkanen: We were well-prepared. It took almost two months to put all the things together. We had a director from Helsinki named Mikko Tirkkonen, and it took two days for him to film everything.

Snellman: He was a total professional. We didn’t have any experience filming music videos; he was really good.

Loikkanen: We called all of our friends to see if they wanted to show up and be in the video. That was a good party.

Snellman: We had an actual party after the video shoot was finished (laughs).

Dead Rhetoric: What qualities do you consistently want to get across that distinguish the band from others past or present playing in the melodic death metal genre?

Snellman: I don’t think we have really thought about this that much. That’s a good question.

Dead Rhetoric: Being a younger band influenced by the 90’s/2000’s death metal movement, do you feel that you have a different take on things?

Dead Rhetoric: How would you describe the band live versus what people hear on the recordings? And what have been some of the more memorable shows to date for the group?

Snellman: We have a gig coming up February 4th, it’s going to be the EP release party in our hometown. We haven’t had any live shows yet, so that will be the first one. We can base this answer on rehearsals. We play quite similarly as we play on the record, except maybe some guitar layers are not there if there are a lot of parts going on and we only have two guitars.

Dead Rhetoric: What do you consider some of the biggest challenges facing Admire the Grim this early in the band’s career?

Snellman: It’s a little bit difficult to balance our day jobs with the band, because both take a lot of time. That’s the hardest thing, finding time.

Loikkanen: As much as we would like to play all the time, it’s impossible. I hope there will be more hours in our days.

Dead Rhetoric: What would you consider three of the most important albums (metal or otherwise) that help shape your outlook on music today? And what has been the best concert memory you’ve had attending a show/festival – and what made that so special and memorable to you?

Snellman: A big influence for me is Wages of Sin – Arch Enemy. And also, Ghost Reveries – Opeth.

Snellman: My live show – there was this small thrash metal band called Inkvisitor some years ago. I don’t know if they are still going, but they had a really good show some years ago. That really stuck to my mind.

Dead Rhetoric: Did you ever have the opportunity to meet Alexi of Children of Bodom in person before he passed away?

Loikkanen: I saw him up very close when they were doing live shows. I was in the front row – Roppe and Alexi, and that was amazing.

Dead Rhetoric: What worries you most about the world that we are living in today? Where do you think the focus needs to be for the average person to make things better, calmer, or more stable overall?

Snellman: That’s a good one. What worries us the most. I think the world is unbalanced at the moment, people are very tired because of the Covid situation and now the war in Europe. Finding some kind of balance in individual lives, that would be very important, even though sometimes it may be very difficult.

Dead Rhetoric: What sorts of hobbies, interests, or passions do you have away from music that you like to participate in when you have the free time and energy to do so?

Loikkanen: I like video games, and I play Magic: The Gathering card game. That’s a good one for me.

Dead Rhetoric: How do you see the next year or so for Admire the Grim when it comes to promotion, live shows, festival appearances, etc.? Are you hard at work on the next set of material – and will it be another EP release, or do you have hopes to put out a full-length record?

Snellman: We are working on our full-length. We have a couple of songs ready, and more in the works at the moment. For the next year, we are hoping to get as many gigs as possible over Finland. We have a couple of gigs confirmed in Finland, and we are talking to some more bars and clubs. Try to be a part of more metal events around Finland.