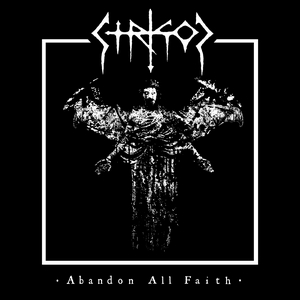 Rising from the ashes of Vallenfyre, Strigoi is a two-piece act of Greg Mackintosh and Chris Casket that is meant to break more varied musical ground. Given that Vallenfyre was an exploration of death metal coupled with crust and punk, there’s already some varied material on the plate (at least, in comparison to like-minded old school death metaller). Strigoi ups the ante in a few directions, while simultaneously providing a more cinematic and bleak experience.

Tossing in the aforementioned styles together with some helpings of doom, black, and even a little bit of industrial, there’s a lot of variation as you move from track to track. There are some raging death metal tracks (containing some thick crust) that all but pummel the listener from start to finish (see “Nocturnal Vermin” or “Throne of Disgrace”) and these are broken up by having some tracks with more foreboding atmosphere and eerily dark tones (see “Phantoms” or “Plague Nation”) that still bring a sense of brutality and urgency with almost cinematic flair. There’s even some slower and doomier tracks like “Carved into the Skin” that really push the bleakness up a few notches with some gritty and dirge-y riffs. No lack for old school death metal grooves either (“Iniquitous Rage”), and the production really gives it a chunky feel to get the listener into the right spirit. Given all of these different elements at play, it could have easily been disjointed and all over the map, but the death metal underbelly ensures that the music moves forward with a surprising level of consistency – a testament to the clear songwriting ability of the band.

Abandon All Faith is an interesting start for a notable act, as Strigoi continues forward with the legacy of Vallenfyre while giving it more of a diverse playground to cause destruction in. There’s enough massive death metal riffage to bring in the old school fanbase, but at the same time, the band finds themselves in the position where they can easily bring in other elements to heighten the sense of despair and dread – an effective way to balance out the anger and hostility.