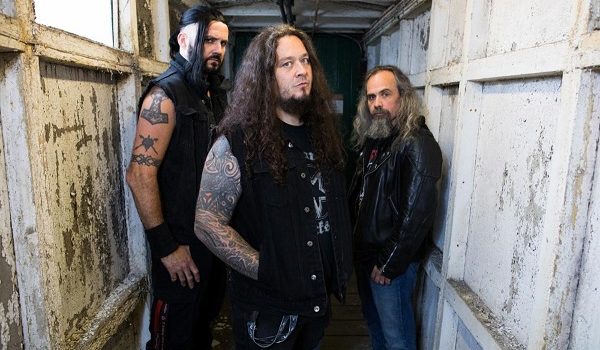 Pedigree, while always a nice thing to have, doesn’t guarantee a new band’s validity. The supergroup age of recent memory has taught us many valuable lessons, the most obvious being that background, past achievements and geographical locale don’t always make for a safe bet. The U.K.’s Godthrymm tick off all of those boxes: Members of notable musical history. Geographical locale tying them to a certain sound. And the expectations created by virtue of previous accomplishments. Formed in 2017 by former My Dying Bride, Solistice and Vallenfyre guitarist Hamish Glencross, Godthrymm explores the vast and illustrious terrain that is the U.K. doom metal. It is an area previously plodded by the likes of Peaceville-era Anathema, Paradise Lost and Hamish’s former My Dying Bride, and has come to embody the most miserable and dreary of doom. While the band’s 2018 A Grand Reclamation EP showed promise, their first full-length, Reflections (Profound Lore) is tried-and-true, feet-on-the-ground, earth-moving doom, emboldened by a fever sea of melodies, plodding, suffocating tempos and Glencross’s surprisingly digestible rasp. It is an album that lives up to the band’s pedigree, something that was on our mind when we sent some questions across the pond for Glencross to answer…

Dead Rhetoric: Do you feel most at home in a band like Godthrymm? It seems like everything you’ve done in My Dying Bride, Solstice and Vallenfyre has led up to this point.

Hamish Glencross: Absolutely. You’re completely right; I’m completely at my most comfortable writing and performing as Godthrymm — it is exactly my most natural style, and certainly reflects all of my musical history, not only musically and thematically, but also in experience and attitude. The debut album is called Reflections — very much recognizing the fact that this album is a true representation of everything that has led me and Shaun to this point.

Dead Rhetoric: What is it about the classic U.K. doom sound that you like the most?

Glencross: It’s so incredibly emotive. I love how it serves as a portal into the darker corners of the soul and is a cathartic way of rationalizing and acknowledging personal sorrows and connecting with other people’s feelings as we all go through times of heartache and anger. That has always appealed to me and continues to do so. There’s something incredibly comforting in huge crushing riffs and melancholic harmony! At least for me!

Dead Rhetoric: You are now a three-piece. Was it easier working in this formation?

Glencross: I love the three-piece lineup. It gives space for each musician to be able to do their thing without competing for the same frequencies. Each of us has such a particular style, so we all get to enjoy doing that to the fullest. It’s also certainly easier maintaining a singular focus without competing ideas. It’s also easier just juggling the schedules and transport of only three people!

Dead Rhetoric: Will you stay as a power trio? Or, will you add another member for live purposes?

Glencross: We intend to remain as a three-piece. There may be the odd live guest perhaps, we won’t write that out. We’re having so much fun playing as a three-piece. Bob’s awesome [bass] playing takes up so much of the space a rhythm guitarist would be filling, so it certainly doesn’t seem like we’re missing anything.

Dead Rhetoric: How was Reflections written? It sounds like it was put together by a bunch of guys bashing it out in the rehearsal room.

Glencross: A lot of it was indeed in the rehearsal room. Shaun [Taylor-Steels, drums] and myself thrashing out ideas and arrangements together, with lyrics and vocals added later. There are only a couple of songs that I brought as fully completed pieces. I’m sure we’ll continue to do a bit of both, but the focus will mostly be on all three of us now writing and arranging together.

Dead Rhetoric: Production-wise, the album sounds natural; almost a throwback to the 90s. How did you achieve these sounds?

Glencross: We used a lot of the original gear that was used back then — old B.C. Rich guitars, old processors, old amps and cans, old Ludwig kit. The brief for the producer was to just capture those sounds as honestly as possible – there’s not really any modern sound manipulation; Nathan Bailey (producer) was just recording as honestly and accurately as possible, and he did an amazing job of that.

Dead Rhetoric: There is a clear melodic component to a lot of these songs. What was the impetus behind putting in so many memorable lead melodies? (“Among the Exalted” is a great example.)

Glencross: I just really love that sound and style. And of course, being in a band with [Paradise Lost’s] Greg Mackintosh for nine years [in Vallenfyre] will have influenced that somewhat! The dichotomy of heavy punishing riffs and pained vocals coupled with beautiful melodies is very affecting.

Dead Rhetoric: How would you rate yourself as a vocalist? Your vocals have a natural gruffness to them but they’re always understandable.

Glencross: I very much had to find my voice. This is the first time I’ve ever taken lead vocal duties, and it was quite daunting. I’m very happy with how my range of voice has developed, and I am very proud of what I’ve achieved on the album. I’ve taken (obvious) influence from Tom Waits, Matt Pike [High on Fire] and Nick Holmes [Paradise Lost] and quite how successful that has been is for others to judge!

Dead Rhetoric: What are some of the album’s lyrical themes? Were you at all inspired by your Northern England surroundings?

Glencross: Some of the lyrics center around personal themes; snapshots of grief and sorrow, but also redemption. Some are certainly more direct. “The Grand Reclamation” is a narrative of Mother Earth as a sentient force rising and ridding herself of the infestation of mankind. “The Sea As My Grave” is simply a broken individual giving up their earthly self to the oceans to be part of something vast and powerful. “Monsters Lurk Herein” is about words merely being signposts towards an intended truth. Our surroundings may have indirectly influenced the style, or certainly the traditions and themes of the music scene from the area.

Dead Rhetoric: What’s the live show approach going to be for Reflections?

Glencross: We’ve got an album release show planned for February 22 at The Unicorn Live in Camden London. There’s a few offers for headlining shows coming in for both U.K. and Europe. We really hope that we can get to do some fests too, so shall wait and see what crops up.

Dead Rhetoric: Finally, how is 2020 shaping up?

Glencross: Exciting and terrifying! But ultimately inspiring, as life and love should be!